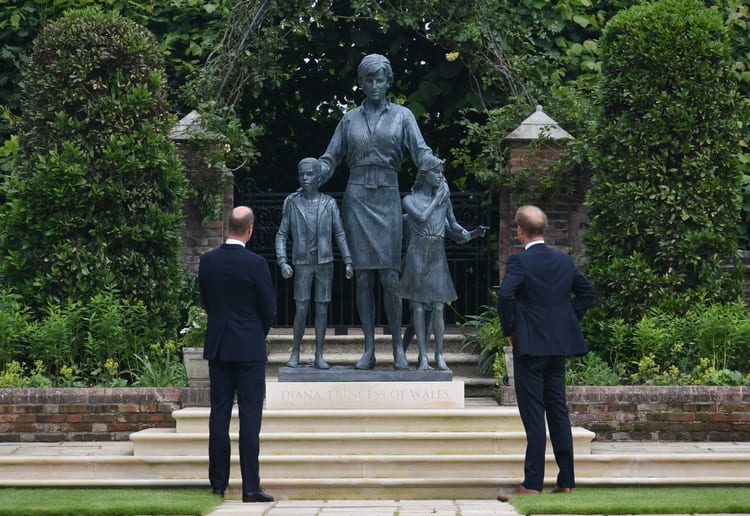 Prince William and Prince Harry were present at the unveiling of a statue of their mother, Princess Diana, on the grounds of Kensington Palace.

A statue of the late Princess Diana has been unveiled on the grounds of Kensington Palace to mark what would have been her 60th birthday.

Both Prince William and Prince Harry were present at the small ceremony where the statue was revealed to the public for the first time. It took two years to complete the statue, sculpted by Ian Rank-Broadly who is known for his portrait of the Queen that appears on the coins of Britain and Australia, and depicts the Princess surrounded by three young children.

Princess Diana’s family, including her sisters and brother Earl Spencer, were also present for the historic unveiling, however, no speeches were made. Instead, a statement was shared by her sons, highlighting the meaning behind the statue.

“Today, on what would have been our Mother’s 60th birthday, we remember her love, strength, and character – qualities that made her a force for good around the world, changing countless lives for the better,” they wrote.

“Every day, we wish she were still with us, and our hope is that this statue will be seen forever as a symbol of her life and her legacy. Thank you to Ian Rank-Broadley, Pip Morrison, and their teams for their outstanding work, to the friends and donors who helped make this happen, and to all those around the world who keep our mother’s memory alive.”

Some have questioned the inclusion of three unidentified children in the statue, but others have applauded the move, saying it emphasises both Princess Diana’s humanitarian work and her ability to relate to even the youngest members of society.

For Prince William and Prince Harry, it’s hoped that the statue will provide a source of unity in what have been tense times between the pair.

“The fact that their mother is there you know in a real physical sense perhaps you know in the evening when the grounds are shut they could easily come here for a moment of quiet reflection,” sculptor Rank-Broadley said.

We certainly hope that the statue not only serves as a reminder of Princess Diana’s incredible legacy, but also her most important role as a mother.

What do you think of the statue of Princess Diana? Let us know in the comments!