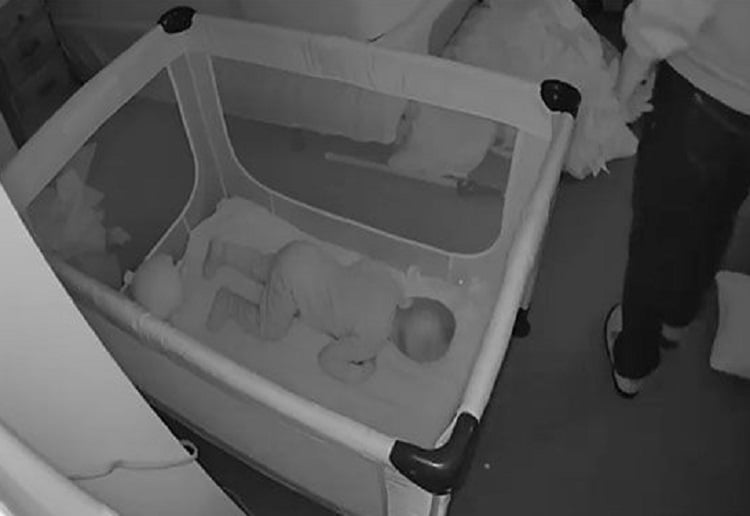 An intruder broke into a Utah home and walked around the bedroom as a mother and her baby slept.

The man broke into the home on Monday about 3.40am local time, according to the Layton City Police Department.

Chilling footage shared on the police department’s Facebook page shows him walking around the room as a baby sleeps in a cot.

Police allege he exposed himself as he stood next to the bed.

The mum told WGN9 she was terrified after viewing the footage from their nanny cam.

“What if he was taking pictures of me? I feel like that’s taken from me. My privacy of my body should be mine alone,” she said.

The couple do not know how the man got into their home as every door was locked and there were no signs of forced entry.

Shocking footage shows the moment a man climbed through an eight-year-old girl’s bedroom window before allegedly assaulting her.

The spine-chilling CCTV footage was captured in Sydney at 2.52am local time on Monday and shows the sinister home invader creeping back out two minutes later before closing the window and fleeing into the night.

The man, who is believed to have spoken with a British or Australian accent, is accused of briefly speaking to the victim before going on to assault her.

The girl was not physically injured and ran to her mother right after the horrifying incident who then immediately contacted police.

“The young victim and her family have shown extreme courage in coming forward to the police, their welfare is paramount.”

“We are asking any member of the community who has seen anything suspicious to come forward, anything in the last two weeks,” she said.

Police say the man knew exactly where the girl’s bedroom was and how to get in.

They say it appears to be a targeted attack and are concerned he may have been stalking the family for up to two weeks.

The attacker is described as being around 170cm to 180cm tall with an Australian or British accent. He was wearing a dark-coloured hoodie, cargo pants and a hat.