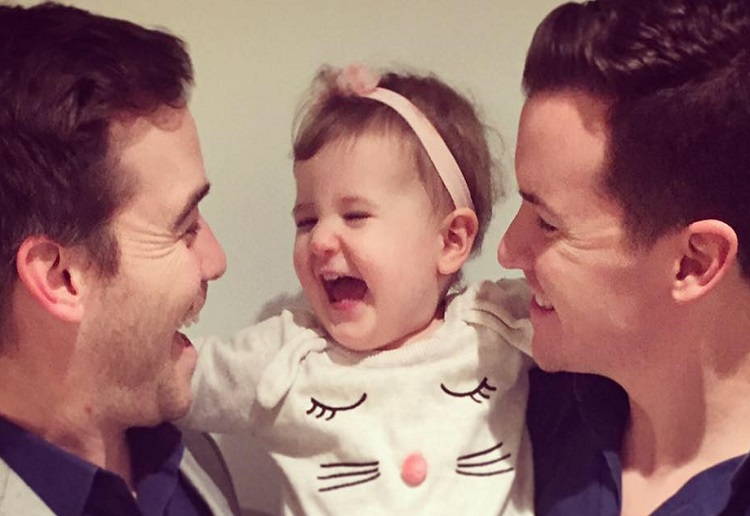 Big sis vowed to help her gay brother and his partner become parents, not once but twice — after recently giving birth to their second daughter.

Rhiannon Stevens, 35, from Melbourne, first offered to become a surrogate for younger brother Clinton when he “came out” 14 years ago, reports Newscom.au.

After meeting his partner Callum, 33, the pair tied the knot in 2012 and began to pursue their dream of becoming parents.

But with adoption and international surrogacy proving difficult for the couple, Rhiannon, a mum of three, stepped in to help.

Using a donor egg and the couple’s sperm, Rhiannon became pregnant with their eldest daughter Zara, two, after a successful embryo transfer in 2014.

Their second daughter, Aiden, who was born just three weeks ago, making the couple proud parents for the second time.

Rhiannon said: “I’ve always said that when the time came, I’d help Clinton to have a child.

“It felt like the most natural thing in the world to offer to be his and Callum’s surrogate. I’ve never been concerned about having any difficulty handing the baby over to them at the end of the process.

“After Zara was born, it only took me three months to offer to go again.

“Clinton and Callum are absolutely wonderful with kids and helping them to become parents was a dream come true for me. I’d do it again in a heartbeat.”

Clinton said, “The fact my sister helped us to become parents twice is such a testament to the woman she is.

“Becoming dads for the second time is a gift we can never repay and we’re looking forward to explaining to Zara and Aiden exactly how they came into the world when they’re old enough.”

Best news ever! Congratulations on the birth of little Aiden guys.