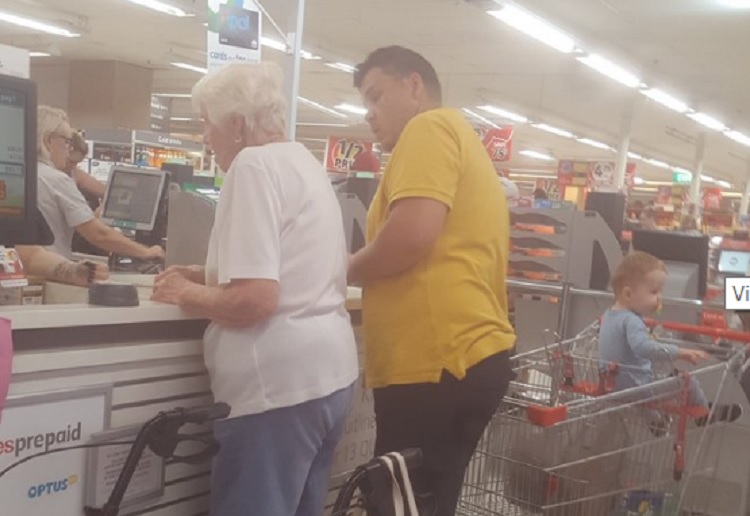 A kind-hearted father has became an internet hero overnight.

Ryan O’Donnell, 34, paid for an elderly woman’s groceries when her card was declined said he did so because she reminded him of his grandmother.

He was shopping with his two children at Wyoming Coles on the NSW Central Coast on Tuesday when he saw the elderly woman having trouble paying for her groceries.

Mr O’Donnell, a stay at home father of a young girl and boy, told Daily Mail Australia he decided to help because it was how his parents raised him.

‘Realistically it was just because the lady reminded me of my mum and grandma and that’s how my mum and dad brought me up,’ he said.

‘If you can help, you do it where and when to the best of your ability.’

Mr O’Donnell said the elderly woman had tried to use her card to pay for her groceries but it was repeatedly declined.

‘Someone was trying to tell her to try different account and it didn’t work so they took her to the front area and I walked past and overheard,’ he said.

Mr O’Donnell said the woman, whose items were packed away in her wheelie cart, asked him how she could repay him.

‘I said you don’t have to worry about it,’ he said.

The random act of kindness inspired a passerby to take a photo of Mr O’Donnell and the woman.

‘This guy at Wyoming Coles who just went through the register with his two kids paid for this lady’s groceries when her card kept declining,’ the passerby, Luke, wrote on Twitter. The passerby said the woman offered to eventually pay the man back, but he wouldn’t have it.

‘He just said, ‘Don’t worry, have a good day’,’ the kind stranger told the woman.

This guy at Wyoming Coles who just went through the register with his two kids paid for this ladies groceries when her card kept declining ???? pic.twitter.com/pTLq0ij6NK

Couldn’t fit this in the original tweet but she wanted to pay him back eventually and he just said “Don’t worry, have a good day” https://t.co/9PopSHl6MT