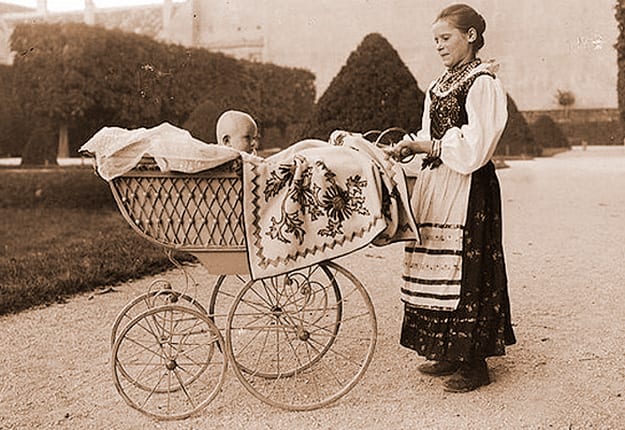 Mum to be Clea Sherman dips her toe into the crowded pool of prams.

It was our first trip to the baby supplies shop.  I was five months pregnant and my husband Garrett and I teetered on the edge of the store in the middle of the home makers mega mall before taking a deep breath and venturing inside. The sales assistant approached us with a friendly “may I help you?” while we stood gripping each other tightly and staring at the vast array of prams like they were alien space ships.

We recoiled and in unison practically shouted “no!” at the poor girl before beating a hasty retreat from the store to our safe ground of JB Hi-Fi. Once among the comfort of mainstream DVD choices we high-fived each other on a job well done. We had broken the seal! Next time we might actually touch a pram. But no need to worry – we had months till we had to decide on something, right?

News flash! The ‘good’ prams have to be ordered up to three months in advance. It turns out having a baby is a little bit like getting married, once you’ve set the date there’s a lot of work to be done if you’re going to get what you want. Just like with weddings, there are so many options. But unlike the perfect dress, the perfect pram isn’t something you’ve been picturing since you were barely out of nappies yourself.

So – prams. The range of options includes forward facing, ultra lightweight, off road suspension, one touch foldability, extra storage and peek-a-boo windows. I could go for one of those fab looking celebrity jogging prams (that we all know I’m only going to wheel to the coffee shop and back), or perhaps a space age looking contraption with hydraulic reclining functions, and don’t forget optional extras like rain covers, liners and the ever important cupholders that as a mother I won’t be able to live without. All of a sudden I‘m involved in discussions about McLaren vs Bugaboo… and my days of thinking Phil & Ted are guys from the IT department are well and truly over. There’s the added hazard of mentioning buying second hand in some circles of friends – I mean how could anyone even consider a potential finger slicing baby trap with no warranty that just ever so slightly smells like some other child’s vomit from three years ago? Not when the Compact Techno Explorer is only $1799 and comes with a built in stereo system! (Hmm stereo system… will have to check if that actually exists…).

I’m not sure about your best beloved, but I didn’t find my husband’s input to be particularly helpful. He went through a phase where he was intent on inventing some kind of baby hot air balloon. The perfect solution! It’s weightless, and you just have to attach it to your wrist and let the child float softly above you while you go about your business. I put a stop to the idea once a manual on model hot air blimps turned up from eBay. You might think I’m joking here.

There was also the brainwave for a baby rickshaw that you attach to your hips and haul behind you, leaving your hands free and your eyes to focus on approaching hazards.

Thanks but no thanks Darling!

The only thing left after scouring the internet for reviews, questioning other mothers and weighing up the pros and cons of the dozens of prams on the market was to decide on a couple of must-have features for my particular life style, to set my budget and to take a deep breath and head back to BabyLand with something firm in mind.

But of course, after all that head scratching, once I finally made a decision – they won’t have it in red till next October!