Article Swimming legend Libby Trickett on how motherhood changed her 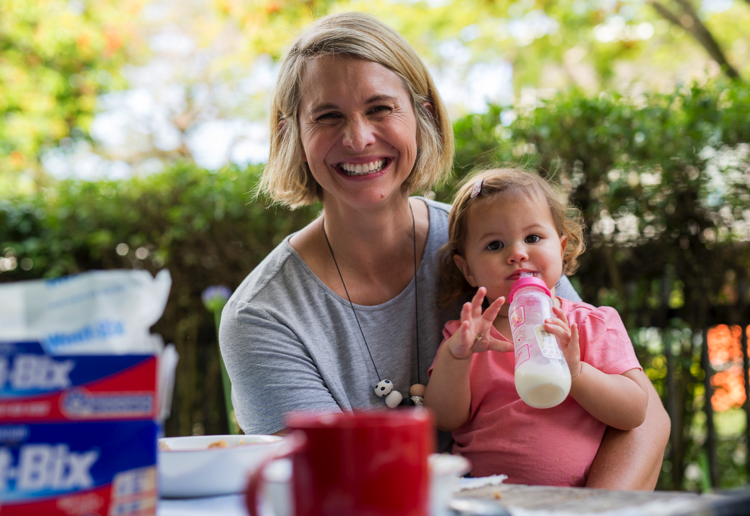 Four-time Olympic gold medallist Libby Trickett with her wide smile and confident, bubbly nature is the last person who you’d expect to be struggling with motherhood and anxiety.

However the 31-year-old admits that the past year with her 14-month-old daughter has tested her body, mind and soul.

Gorgeous Poppy appears with her mum in a new video on the Weet-Bix website as part of their month-long Messy Kids Search competition. The contest, which is on now until November 28, asks people to upload a picture of their child’s messiest food moment onto the site. In the video, Poppy is seen smearing Weet-Bix all over her face as she enjoys a bowl of the cereal.

Libby, who is the competition’s celebrity judge was only too happy to be part of the initiative which reflects the everyday struggles many parents go through.

“What appealed to me about the competition was the realness of it,” says Libby. “As a parent, life isn’t perfect, pristine and clean. It’s not all those things that some people might have you believe.”

Here Libby gives us a the low down on Poppy, her husband Luke plus her struggles with depression and post-natal exhaustion.

Is Poppy a messy eater?

Absolutely! Making a mess with food is just an everyday thing with Poppy. Last night we were eating spaghetti bolognese and half of it ended up on the floor. Luckily our three dogs Wilson, Buddy and Harry ate it up. They love it when she eats!

When I was pregnant I thought I would have a blonde, placid boy, but instead I got a brunette outgoing girl! Poppy’s awesome – a little nutty, full of energy and very stubborn. There are times when she’s quite focused, but also a little distracted.

She’s a real mixed bag – a reflection of my hubby and me!

Is Poppy enjoying the water?

Yes, she is – we’ve started swimming lessons and will have a good splash with her. Lots of people ask me whether I think she’ll be a swimmer. It’s still too early to tell, but at end of day, as long as she loves the water and is safe in there, that’s fine with us. Although it would be fantastic if she wants to be a professional swimmer – I would love to share that with her!

Are you enjoying this stage of motherhood?

I do enjoy this phase much more – apart when Poppy’s teething which can be a bit of a nightmare! Poppy is really engaged in what we do and is learning so much. I feel I can really play with her now and read books together.

When I thought about being a parent, that was the part I was always really looking forward to. At one early stage when it was pretty tough I irrationally wondered whether Poppy even liked me. I’m pretty sure she does now!

How is Luke enjoying fatherhood?

He loves it. I think in the early days he felt a bit helpless because he couldn’t contribute a whole lot when I was breastfeeding and getting up at night. However now that he can play and engage with her he’s just the best. It’s so nice to see her with him. He now owns his own fund management business which is full on. Being from a swimming background he likes putting in hard work, however he still makes time for us as a family.

Do you think mums are too hard on themselves and each other?

Yes, I think there’s quite a bit of Mummy shaming about. From the age of four to eight month Poppy didn’t sleep more than 45 minutes at a time. I was breastfeeding and severely sleep deprived. Finally, my husband Luke and I had to call in a sleep consultant. Once the consultant recommended we do controlled crying with Poppy. It was heartbreaking because I felt like I was ignoring my child. However it was hard to even talk about because I felt like people would judge me for my choice.

Motherhood is one of those things you have to figure out for yourself. We can be very judgmental of people in different situations, but we all have individual challenges that should be respected.

You been candid about your struggles with depression, can you tell us more about those times?

I had a dream meet at the 2007 World Championships walking away with five gold medals. I also won the 100 freestyle for the first time which was a dream come true, and then became the first break 53 seconds. Afterwards Luke and I got married and the wedding was covered by a magazine. A few days later someone wrote me an anonymous letter saying I was a really awful person for going through with the story, that I should have just had a private event. It sounds so trivial now, but it triggered something inside that made me quite depressed. I suddenly had trouble training, getting out of bed. I scaled back my training and had a few fights with my coach. It took a while but eventually I managed to get it together and went on to win gold at the Olympics.

You then had another episode?

Back in 2009 I decided to retire from swimming. However it was very confronting and I became depressed again. I questioned who I was outside of the pool. I wondered – how do I define myself if I am not wining gold medals? How am I worthy people’s attention, what’s my passion?

I did a few different things but then decided what I really wanted all along was to continue swimming so I came out of retirement and went on to win another gold at the London Olympics in 2012. I retired for good in 2013 and it was much better timing.

Well I did actually think I was slipping into PND. Hiring the sleep consultant was such a difficult decision, because I thought, ‘Why do I need someone else to help me? Now I just feel like I’m failing as a mum.’ It was a torturous time because I felt like I didn’t know what I was doing at all. I struggled to make any decisions and was like a walking zombie.

In the end my doctor said I’d been suffering from post-natal exhaustion – extreme tiredness following pregnancy – which is not as severe as PND but debilitating all the same.

You’re an ambassador for Queensland Mental Health and have been open in the past about your previous battles with depression, what is your advice for people struggling?

I think most importantly talk to professionals, which worked for me. Finding a GP you trust is really important plus a good psychologist or consultant.

I’m quite a bubbly, smiley person so a lot of people wouldn’t have even known I was struggling. Life is hard. You could be facing death, change, illness, accidents, financial stress, or relationship pressures. To say it’s all going to be easy isn’t reality so you have to put systems and support in place that will work for you.

Can you relate to Libby’s experiences? SHARE YOUR THOUGHTS in the comments below.