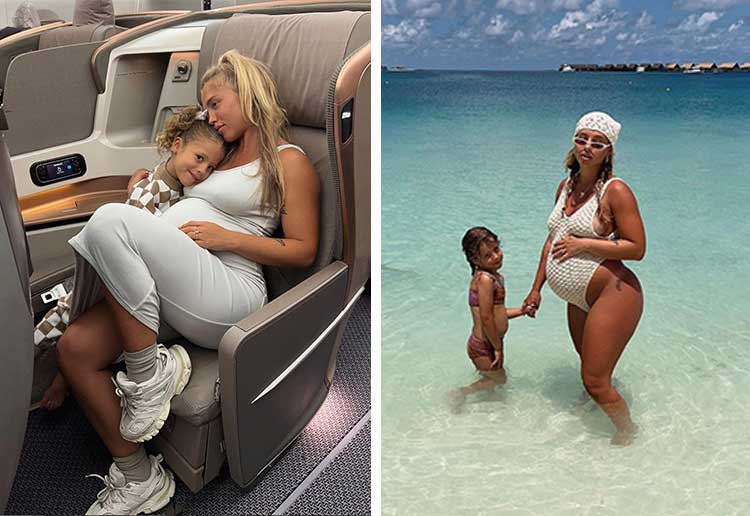 The 27-year-old model is currently holidaying in the Maldives with her fiancé Matt Poole, her son Wolf and daughter Saskia. She uploaded an image to her Instagram account earlier this week, showing her on a plane flying businesses class to a holiday destination. She asked her 14.5 million followers, “Any guesses where we’re headed?”

But some responded with concern that the soon-to-be mum-of-three was flying so late in her pregnancy.

“I give you credit … if I traveled that far out pregnant I might end up having the baby just by self induced anxiety,” commented one follower.

“Wow you’re game to fly that pregnant,” wrote another. “There was no way I would risk having a baby overseas or on a plane.”

But Tammy brushed off the concern: “I’m only 32 weeks haha not about to have this baby on a plane,” she said.

But another mum continued: “Problem is its not always planned. Mine came at 33 weeks without warning. It’s so unpredictable with birth and we don’t know how good the healthcare is overseas. Your life your choice though, I’m more of a worry wart than most.”

According to Better Health, the safest time for travel during pregnancy is the second trimester, as long as there are no complications.

Smartraveller says most airlines won’t let you fly beyond 28 weeks of pregnancy, but every carrier has their own set of rules.

Tammy has since been sharing stunning images from her family babymoon, including snorkeling with sharks.

Tammy Hembrow reveals her baby will be born with extra fingers

Earlier on in her pregnancy, Tammy revealed her baby will be born with 12 fingers, after inheriting a condition that runs in her family.

“So basically the baby has what I had when I was born, which is 12 fingers,” Tammy explains during the ultrasound. “Six fingers on each hand.”

The genetic condition, known as polydactyly or polydactylism, results in babies being born with extra fingers or toes. It’s a pretty common condition and runs in families, as it does it Tammy’s.

The model and mum-of-two explained that her sisters, brother and mum all had extra fingers when they were born. But she said it skipped her oldest two children. “It skips a few people, like it skipped Wolf and Sass, but this baby has 12 fingers. Isn’t it crazy?” she said.

The extra fingers are usually small and not well developed, and the most common treatment is for the extra digits to be removed. Tammy has previously shared that she didn’t even know she was born with extra fingers until she was 12-years-old, because they were removed when she was a baby. 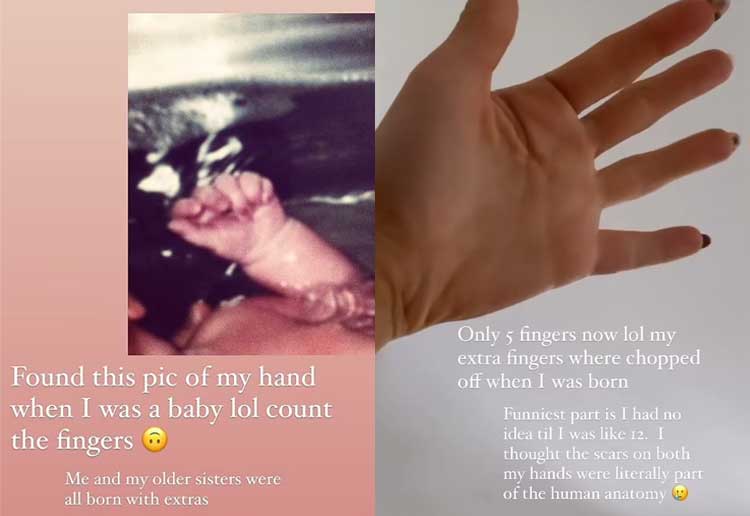 Want more celebrity pregnancy and baby news? Head to these articles next: