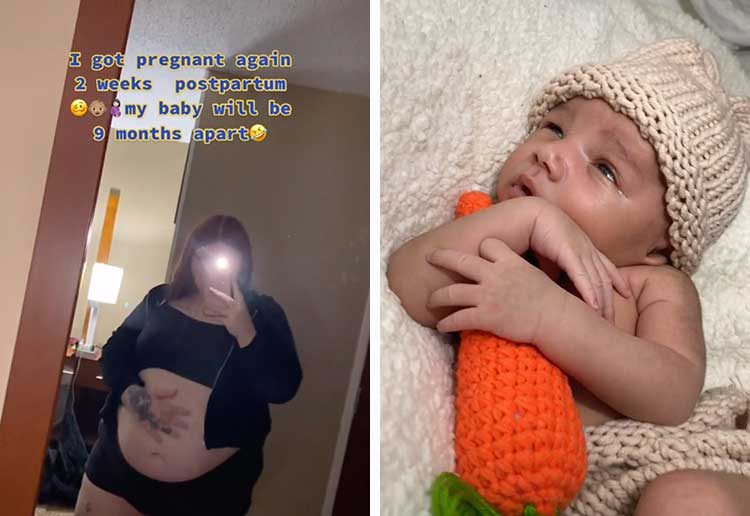 If there’s one thing most of us can’t even think about doing in the weeks after birth, it’s getting back into doing the ‘baby dance’. But this mum says she fell pregnant just 14 days after giving birth to her first little one.

Gracie shared a video at 33-weeks-pregnant with her second, saying she’s been pregnant for almost two years straight and she’s ready to give birth to her baby and get her body back. “I got pregnant again two weeks postpartum. My babies will be nine months apart,” she captioned the video.

When she first shared the video, she only had 15 followers on TikTok, but it’s since gone viral and attracted plenty of criticism.

“People have to take the waiting six weeks more seriously,” one person commented.

“Isn’t this dangerous,” asked another commenter.

Gracie addressed the concerns, saying, “Yes it’s most healthy to wait for your body to heal. If I could go back in know what I know now I would have waited. No I don’t think it’s a flex.”

Gracie has since gone on to have a healthy baby boy, called Avondre, a little brother for Adonis. She says she didn’t need any stitches and it was an amazing labour.

She’s also shed some light on what it’s like having two children under 10 months old, saying it’s harder than she thought.

How long should you wait after giving birth before getting pregnant again?

Ideally, it’s advised to wait at least 12 months between pregnancies, and six weeks after birth before having sex.

For many mums, their period doesn’t return for a few months after birth, but don’t let that fool you – you can still fall pregnant! And there’s also a misconception that you can’t fall pregnant while breastfeeding – wrong!

If you’re looking at having babies closer together in age, it’s best to talk to your own doctor or midwife, as they’ll be able to advise what’s best for your body.