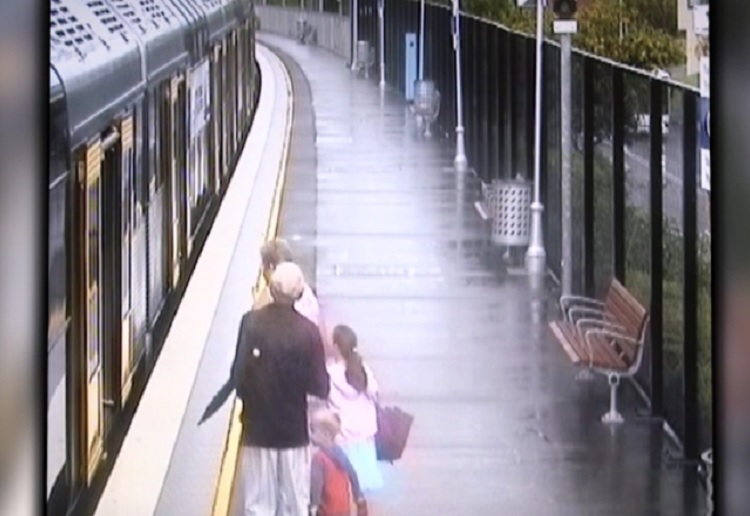 WATCH the terrifying moment a young boy falls between a stationary train and the platform.

The young boys grandparents try desperately to signal for help.

The CCTV footage was captured at Cronulla train station in Sydney’s south-east and shows the young boy attempting to board the train with what appears to be his sister and grandparents.

The family are shown approaching the train and the grandmother enters with the young girl but just as the young boy and his grandfather are about to board disaster strikes.

The little boy misjudges the distance between the platform and the train and steps directly into the gap, his tiny frame fitting perfectly between the two.

The boy’s grandfather watches on in horror as his grandson disappears down the gap and immediately begins to signal frantically to the train guard.

The man’s wife also exits the train and attempts to get help for the boy.

The man then gets down on his hands and knees and reaches down to the boy and manages to pull him back out safely.

The man embraces the boy tightly before a Sydney Trains worker rushes over to check on the boys welfare and ask how the unfortunate mishap happened.

The boy appears to be uninjured although a little shaken from the ordeal.

The shocking clip was released by the state government. In another clip, a young girl falls underneath a train at Epping station as she steps onto the platform while holding hands with a female adult.

Dozens of passengers also rushed to the aid of a young girl who fell through the gap between the platform and a train at North Sydney station.

There was a similar incident at Wynyard just three weeks ago, with a young girl carrying a bag slipping partly down the gap before a man rushed to her aid.

‘Our message is don’t rush, hold your child’s hand and please take care when you are at a busy station,’ Mr Constance said.

“We’ve got school holidays and the Easter Show upon us, and with packed trains and excited kids it’s more important than ever to be keeping an eye on children.”

Have you or someone you know had a close call on the train platform?