Article The Face of Peppa Pig That Shocked the Internet Social media users have reacted in horror after an artist mocked up a drawing of Peppa Pig’s face.

The popular cartoon character, who is only ever seen side-on, was sketched by 16-year-old Japanese Twitter user KwonHanchi.

The young animated artist shared a sketch of Peppa Pig facing the camera front-on which he found on Instagram user 9gag’s page, and was met with horror by fans.

He then added another drawing adding: ‘Hey! This is Peppa Pig’s right face’.

And finally he shared ‘This is Peppa Pig’s front face!’. 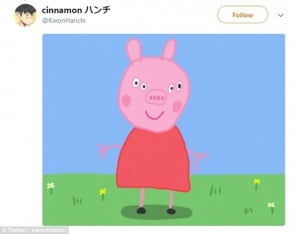 He was soon met with horror from followers who described the drawing as ‘terrifying’.

One person added: ‘Lmao how did she end up gaining two more eyes and nostrils for the front view?’

Another tweeted: ‘I’ve been laughing at this for an hour, help’.

One terrified fan admitted: ‘I’m not going to be able to sleep tonight.

‘I mean, technically, wouldn’t she have TWO snouts!?’ another person questioned while one joked: ‘The stuff nightmares are made of’.

‘There are no words, my nieces like Peppa I will show them this and scare them into reality,’ a cheeky aunt added.

And others couldn’t get the disturbing image out of their head, admitting that they now couldn’t watch the show without remembering the drawing.

‘Peppa pig is on in the waiting room we’re sitting in, and I can’t unsee that left face / front face / right face drawing.’

Oh the horror! We will never  be able to look at Peppa Pig the same way again…