An estimated 20 children are hospitalised per week after ingesting button batteries. That’s twenty too many!

Currently, only toys designed for children under three years of age are required by law to have secure battery compartments.

“Button batteries are powerful, slim and light but they can also be lethal. It vital that the Federal Government acts to reduce the number of children ending up in emergency departments across the country having swallowed a button battery,” says CHOICE Head of Media Tom Godfrey.

“At the moment only toys designed for children under three years of age are required by law to have secure battery compartments, which means that other everyday household items have no mandatory safety standards.

“A quick scan of your home will find poorly secured button batteries in everything from bathroom scales and calculators to remote controls, musical greeting cards, games and toys,” Mr Godfrey says.

“Also known as disc or coin batteries, button batteries can cause chemical burns when stuck in body tissue and can be fatal. This can occur even when a consumer believes the battery to be flat.

“One of the problems with these batteries is that they can be swallowed easily without getting stuck or causing the child to cough, so unless someone sees it happen, parents or carers will be none the wiser.

“The symptoms are also varied, ranging from feeling slightly ill to having a mild cough. To make matters worse, children are often reluctant to tell anyone if they’ve swallowed something they weren’t supposed to.

‘An electrical current is immediately triggered by saliva, which causes a chemical reaction that can cause severe burns to the child’s oesophagus and internal organs such as the lungs, heart, arteries and spine,’ the Product Safety Australia website said. 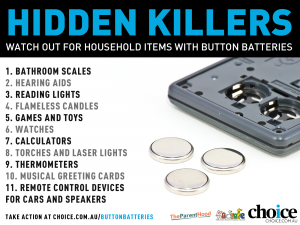 Last month we shared a two-year-old girl from the UK was left fighting for her life after she accidentally swallowed a lithium “button” battery. Read her story HERE.