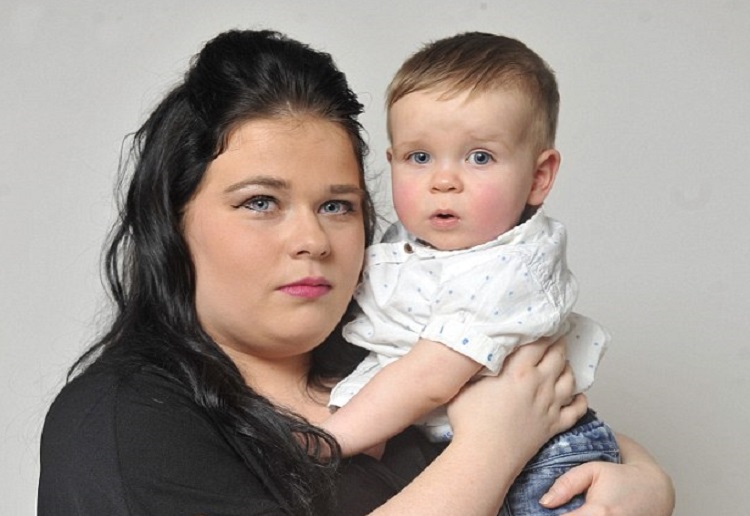 Danielle Johnson refused to believe her son had survived birth.

The 24-year-old went into labour five weeks early after catching pneumonia, forcing doctors to place her in an induced coma.

Surgeons performed a Caesarean section while she was unconscious, allowing Lucas to be born healthy, weighing 2.7kg. But when doctors tried to wake her up, she remained unresponsive for a further three weeks.

20 days after being put in a coma – she woke up. She was convinced Lucas had died and that the nurses were trying to kill her.

Miss Johnson, from Manchester, said: ‘Everything that was going on in my head was a nightmare that I thought I was actually living.

‘I thought all the nurses were trying to kill me and that Lucas was dead.

‘I was very confused at first. I couldn’t speak properly or do anything so when people were talking to me I was just looking at them.

‘I just kept saying “you need to get me out of here” and “prove it” when they said the baby was alive.

My heart started pounding. I was so upset. I just couldn’t understand. When I was with it a bit I realised that my son was three-and-a-half-weeks old and I hadn’t even met him.’

She added: ‘He didn’t even have a name. I was just thinking what if I don’t get a bond with him – it was traumatising.

‘Even when I met him I was still like thinking that I was supposed to have a newborn baby – at first it felt like it was someone else’s baby.

‘I had a bond with him but it wasn’t the instant bond like I had with my daughter.’

‘When it sunk in that what went on in my head didn’t actually happen – it was such a relief.

‘I was very emotional. I just remember thinking “thank God for that – he’s fine, everything’s fine”.’

Four days later, she was finally well enough to meet her little son and she burst into tears and named him Lucas.

What a terrifying experience for them all. Totally understandable that the experience has left the whole family nervous.

Danielle said she panicked after suffering from a cold last Boxing Day, and her daughter, Mia, keeps asking her if she will go away again if she gets a cold.