Article The Touching Story Behind This Photo 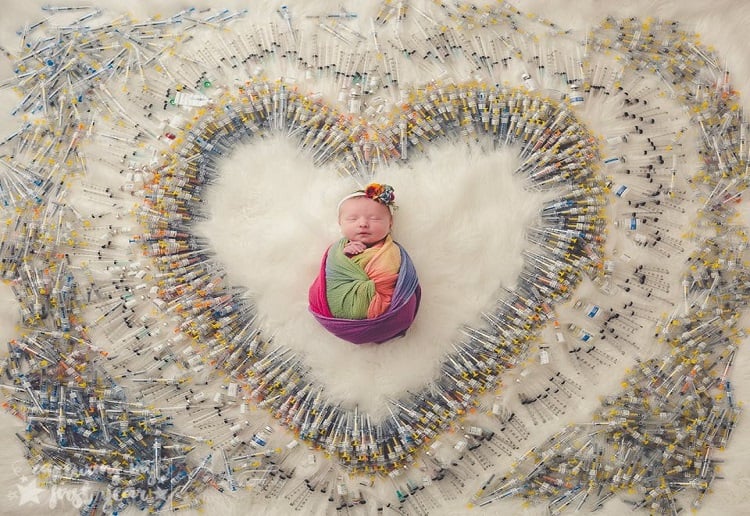 Four years, three miscarriages, and 1,616 shots. That is what it took for Patricia and Kimberly O’Neill to finally welcome their baby girl into the world.

The Arizona couple saved every single IVF syringe they used, and have found a beautiful way to show just how much they went through, shares Daily Mail.

Each needle was used to create a massive heart. And lying right there in the center of it was baby London.

The gorgeous photo, snapped by Samantha Packer of Packer Family Photography, has since been shared on Facebook more than 60,000 times.

Theirs is an incredible story of hope, heartache, and happiness.

A year after they met in 2013, Patricia and Kimberly knew they wanted to grow their blended family.

The Glendale couple, who each have a child from a previous relationship, weren’t too stressed about the process at first.

‘We assumed it would be pretty easy,’ they told DailyMail.com.

‘We would pick a donor, go to a doctor, and in nine months we would have our baby!’

‘We were completely wrong.’

The couple first began with Intrauterine Insemination, or IUI, a cheaper and less invasive process than IVF in which sperm is placed inside a woman’s uterus to facilitate fertilization.

After the first two rounds of IUI failed, they knew they needed to get more aggressive.

The couple suffered ups and downs for years before finally, on August 3, 2018, little London made her grand entrance into the world. Read their full story here.

‘Seeing her little face and hearing her cry was the best feeling in the world,’ Kimberly said.

Their hearts full, the couple knew from the beginning they wanted to take a special picture with all the syringes they used before London was born.

The photo has since gone viral and received thousands of comments, many from fellow mothers who have gone through IVF.

Such an emotional journey.

MUST WATCH: The Frustrating Conversations You Face During IVF