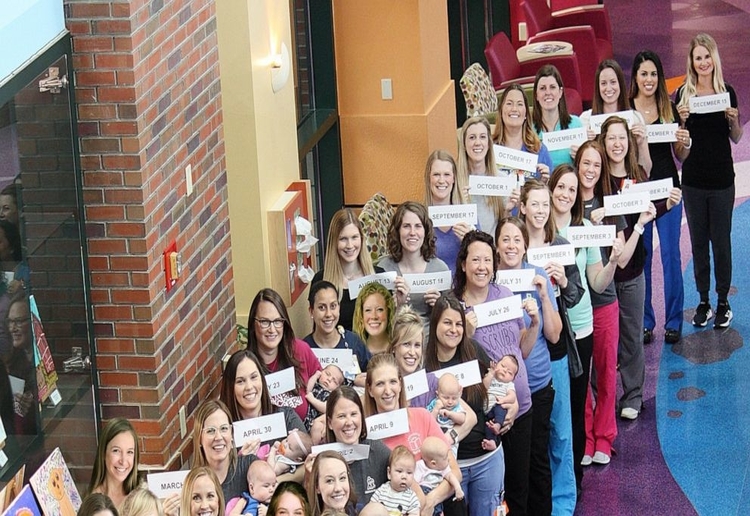 Almost forty nurses from the NICU department at the Children’s Mercy hospital in Kansas City are pregnant!

They are the special nurses who take care of sick and premature babies for a living, but now thirty-six nurses from the Children’s Mercy Hospital in Kansas City are set to become mums themselves.

In what is sure to be some sort of record, the thirty-six women have already admitted that they have been to countless baby showers and gender reveals as they support each other through this exciting time.

When It Rains, It Pours

With all 36 babies due sometimes in 2019, the nurses say they have been looking after one another during their shifts and now have a greater appreciation for what parents on the NICU ward are going through.

“Many of us give each other opinions on things. We have a Facebook group and we weigh in on everything from diaper rash to kids crawling out of their cribs.”

As if it wasn’t enough of a coincidence for so many nurses to be pregnant at once, out of the twenty babies from the group already born, only two have been girls!

The nurses say that it isn’t just birth and babies that they have gone through together, but also many significant life events.

“We were hired fresh out of nursing school and planned each other’s weddings showers,” nurse Allison Ronco said.

“We’ve been through it all together.”

The nurses say that the experience has not only brought them closer together but has made them better nurses and more empathetic NICU specialists.

“Once you have your own baby, everything suddenly gets shifted,” Allison admitted.

“For the most part, we have gotten to go home with healthy babies, but we can really empathise with those mums and the struggle they must go through not being able to.”

Have you got a friend that has gone through life milestones with you? Share your story in the comments.