Article This exercise video has sparked a massive online debate! 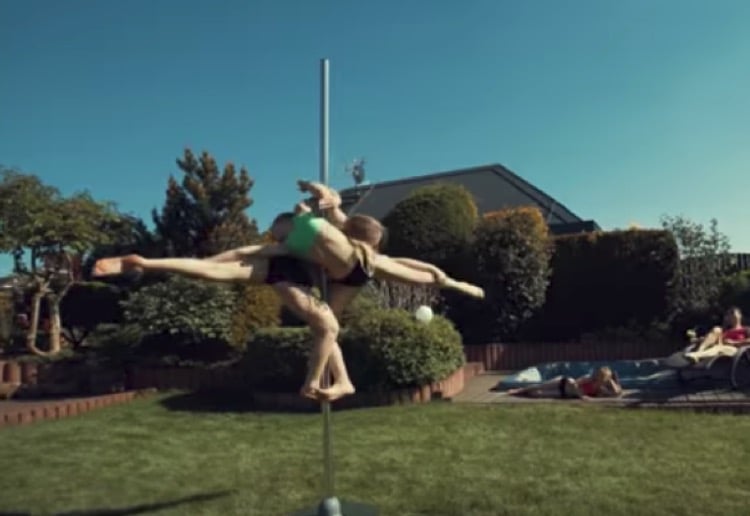 The 35 second advertisement for the GymPole product features slow motion footage of young girls as they swing around the pole.

The video has been viewed almost 2 million times, in the last 12 days, and has sparked an outrage from parents worldwide!

Gympole has released a statement defending their actions, “we just wanted to promote juniors in pole sports as we think they are super talented”.

But others have accused the company of unnecessarily exploiting children in advertising and “feeding into a paedophile culture.”

Many others, however, have defended the advertisement, arguing “it makes me happy to see this commercial done with children. It helps to take away the negative associations that society has [with pole dancing], while showing it is a fun and good sport.”

Parenting author and teen girl educator, Dannielle Miller said that adults should not view innocent childish play through a sexualised lens, or shame girls or women based on clothing choice, but still had concerns with the production elements of the advertisement.

“The slow-mo crotch-cam type shots in the promotional video for Gympole do make me feel uncomfortable,” said Miller.

“We know we need to encourage young girls to exercise. I did my own form of pole dancing, improvised around a Hills hoist when I was eight years old,” Professor Lumby said in a statement.

“Pre-teen girls love dancing, mucking around and showing off. They enjoy gymnastics and the big danger here is that maybe it’s the adults who are sexualising them rather than them sexualising themselves. We need to be very cautions of imposing adult ideas on young girls,” added Professor Lumby.

Despite the outrage, breakfast show host Samantha Armytage said she did not see a problem with the young girls advertising Gympole equipment.

“This is just sport isn’t it?” Armytage asked. “…don’t you think it’s just like watching them do gymnastics? I don’t find that creepy,” she added.

In Australia, pole dancing classes for under 12s have taken off in recent years.

Modern day pole dancing has evolved into exercise form practiced by not only professionals and performers, but by everyone from casual students and gym-goers to national and internationally recognised pole athletes.

The world of Western Pole dates back a lot longer than many would imagine. Pole is practiced today by both men and women, and is a fusion of Chinese pole, Indian Pole or ‘Mallakhamb’, dance of various international influences and pole dancing as seen in the travelling fairs of the American Depression.

The history of ‘Chinese Pole’ dates back prior to the 12th century, when circus professionals of the era would use a pole, approximately 3-9 meters in height, laced with a rubber material and wear full body costumes.

People in India would often play competitively, using a smooth wooden pole which was sometimes laced with castor oil to avoid friction. They would wear little clothing, taken from inspirations of yoga clothing or they would wear similar clothing to swimwear and no shoes to allow better skin to pole grip.

They became pole flip specialists and would often begin a performance by running up to and flipping directly on the pole.

We think these girls are super strong and talented! Let us know your thoughts!