Article This is the result of a common cold. Please stay away! 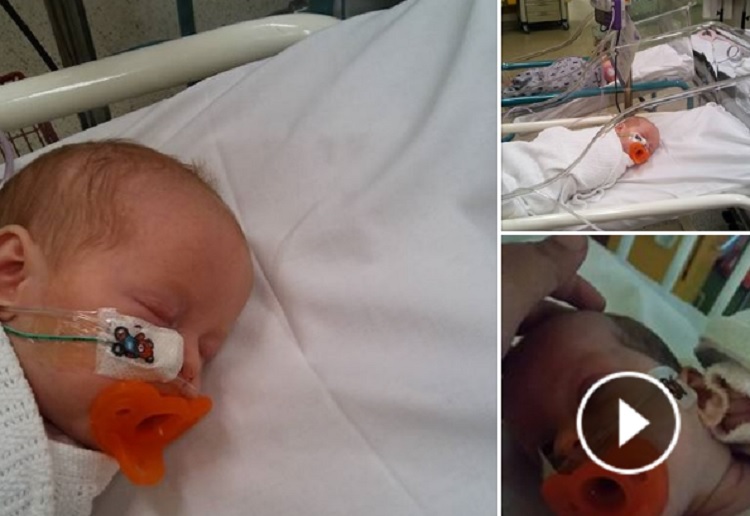 Mum-of-four Laura Wallis, 25, shared devastating photos of her little girls with breathing tubes in their noses, along with the desperate call on Facebook writing: “this is the result of someone with a cold coming near my babies”.

“Please, I urge anyone who has a cold not go near babies,” she wrote.

“One twin on oxygen and a feeding tube and another heading the same way, so please if you are sick even with a minor cold, do not go near babies.”

Six-week-old twins Harper and Harlow were infected with RSV, a virus commonly mistaken for the common cold, which can be deadly to babies, The Daily Mail reported.

“It is heart-breaking and extremely scary to see them like this, I just sit next to their beds every day staring at the monitors,” Ms Wallis told the Daily Mail.

“At this stage I knew why they were sick – I had heard of RSV – but didn’t realise how bad it could be or that it would just look like a common cold.”

The girls were born five weeks premature and Ms Wallis said she explained to family and friends that even a minor illness could harm them and she told them not to come over if they were sick.

“I just can’t believe someone decided they would be able to risk it with my babies. Now they could die.”

Both of the babies are being fed by tubes, but for now the larger twin, Harlow, doesn’t require oxygen but that could change.

“I can’t give them anything orally because they just aren’t coping,” she said.

“Every time we hold

them for too long all of the alarms go off, it is really scary.”

“Even if you just have a runny nose don’t risk it – with babies it can be life or death because they haven’t built up a strong immune system.”

Please stay away if you are unwell

NSW mum, Kirsten Brown, told 7 News Online how her baby was recently airlifted to hospital in a similar situation.

She said she wanted to raise awareness of how sensitive premature babies can be to the flu.

Ms Browne, of Fairy Meadow, said her son had been in intensive care at The Children’s Hospital at Randwick for the past week after someone suffering from a cold came a little too close to him.

“It’s the most terrifying thing. If I talk about it I still start to cry,” Ms Browne said.

“He got very ill quite quickly… we took him to hospital and he had to be airlifted to Randwick and put into intensive care… it then turned into a lung infection.

“There were tubes down his mouth, catheters in his arms and legs… it’s nothing you want to ever see.

She said many people did not realise that they should not come near premature babies when suffering from a cold.

“When I heard this mum’s [Ms Wallis’] story, I thought, thank God I’m not the only one who feels like this,” the mum-of-five said.

“We really need to get this message out there.

“I know what this lady is going through and it’s just awful, I really hope her girls start to turn the corner soon.”

Kirsten added, ” prem babies lungs are still developing, people need to keep in mind how sensitive they are.”