Article This just happened…10 years on! 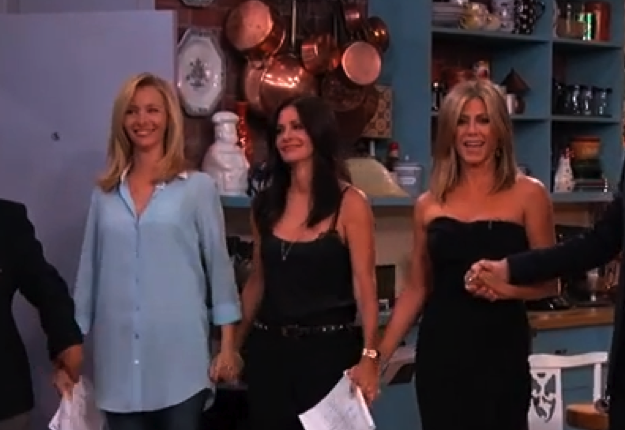 Ever since the series finale of Friends aired over 10 years ago, fans have been waiting for a reunion.

And thanks to Jimmy Kimmel, it finally happened!

Jennifer Aniston was appearing on Jimmy Kimmel Live when the host (a self-proclaimed Friends fan) asked her to read a Friends skit he had put together.

“I loved the show so much I actually wrote some fan fiction,” Kimmel said. “I wrote myself into it as Ross. I was wondering if you would do a scene from it with me?”

Aniston, who looked a little unsure at first, walked onto Kimmel’s $80,000 recreation of Monica’s apartment from the TV series, proclaiming “What is this!”

While the skit began with Ansiton reprising her character, Rachel, and Kimmel stepping into the role of Ross, the pair were joined by two former Friends stars (and Aniston’s close friends) Courtney Cox and Lisa Kudrow.

Check out all the fun in the video below:

The reunion comes as Warner Bros announced that it will set up a pop-up version of the Central Perk coffee house featured in the show, to mark the show’s 20th Anniversary.

What is your favourite Friends moment?