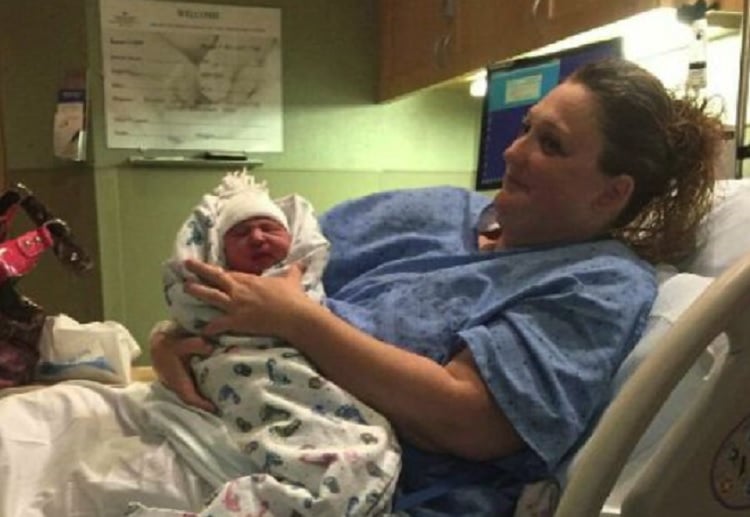 Mum left work with an upset stomach only to give birth in the bathtub not even realising she was pregnant.

Angie Hernandez from Utah, tells KSL she had no symptoms to indicate she was pregnant.

“My little girl that I had previous — she’s 20 months old — I felt every contraction, breathed through it,” she said. “I had her natural, so I was thinking maybe that’s why it was so much easier with her, I don’t know, but yeah she was like three, four pushes, and she was out, but this one, she just was out.”

Thinking she had eaten something that wasn’t agreeing with her, Angie says she left work with stomach cramps.

At home she had a bath to help with the pain but when she tried to get out of the bath to use the toilet she couldn’t. As she sat back in the bath, she gave birth to a little girl.

“I told my oldest son that was outside the door to call my boss and my husband and told him to get home right now,” she says.

She said her family thought she was playing an April Fools’ joke on them or they thought the baby was her 16-year-old son’s that they agreed to take care of.

We recently shared the story of mum Klara Dollan who woke with what she thought was period paid, she had no idea eight hours later, she would give birth to a healthy 7lb baby girl. (Read her story here.)

The Daily Mail reported, one in 450 pregnant women in the UK don’t know they are going to have a baby until week 20 of their pregnancy (half-way through), and one in 2,500 women are oblivious to the fact until they go into labour.

Characteristics/symptoms of a cryptic pregnancy are:

Causes of a cryptic pregnancy?

Studies suggest that such cryptic pregnancies occur when women suffer from a hormonal imbalance.