Article Mystery Solved: This Is Why Tiny Holes Appear In T-Shirts 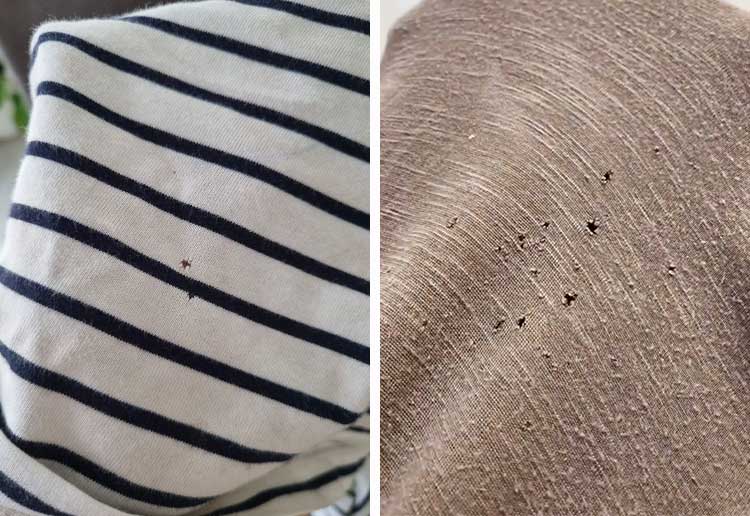 It’s one of the great mysteries of the modern world – where do those tiny holes in the front of t-shirts come from?!

There doesn’t seem to be any rhyme or reason to their appearance, and they don’t seem to discriminate – expensive tees and cheap and cheerful tops all seem to fall victim to the pesky little holes. It’s such a strange phenomenon. The holes always appear in the same spot; in the middle of the lower belly. But just how do they get there?

We decided to ask our Mouths of Mums community to help us solve the mystery – and we had literally thousands of responses!

What causes tiny holes in t-shirts?

Here are some of the most common reasons the MoM community gave:

While theories about critters gnawing away at t-shirts abound, it just doesn’t seem plausible. Why would moths and silverfish all choose to attack tees in the EXACT SAME SPOT?! It doesn’t make sense, and therefore we can probably discount that theory.

What about the washing machine and dryer? Some have suggested that the tops can get caught in the small holes of the appliances as they spin around. But, again, why always in the same spot? We’re not convinced this is the reason.

The peg theory doesn’t fly either – because I never peg my t-shirts in the middle of the belly area, only at the sides.

So, what does cause the little holes in t-shirts then?

The most likely cause is friction of some kind. It could be from rubbing against bench tops, or seatbelts. But most likely it’s probably from zippers and buttons.

Bayard Winthrop, the founder and CEO of basics brand American Giant, told TODAY that part of the tee is a prime spot for abrasion.

“The fabric there is (rubbing) against the hardware: your belt, the tops of your jeans, all points of wear. The friction, repeated over time, has caused the fabric to deteriorate. The real culprit here is often the T-shirt fabric itself. The garment itself might be produced as cheaply as possible, cutting costs where possible. Bummer, right?”

How to avoid little holes in t-shirts

So, now we know the cause, how do we stop the little holes in t-shirts from appearing? Here are a couple of ideas:

So there you have it! Do you agree with this theory? If not, let us know in the comments below.