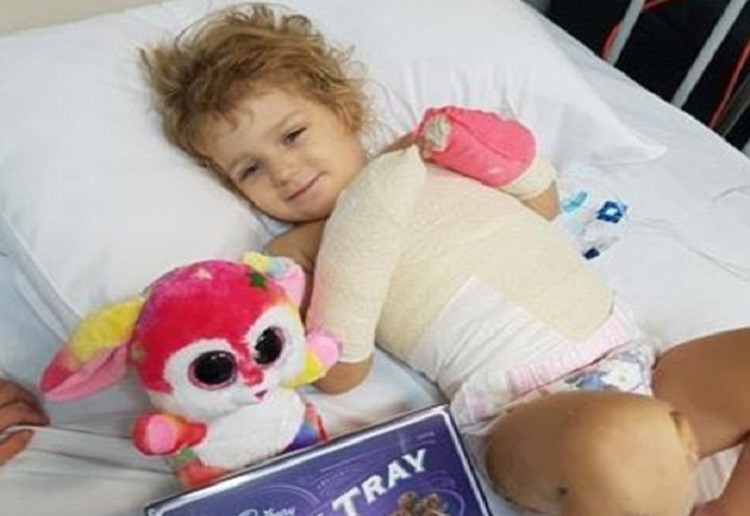 Toddler requires emergency skin grafts to her right hand and stomach after a freak treadmill accident.

Kelly Gay, 35, was on the phone outside her home in South Headland, north western Western Australia, with her service provider last Saturday when she heard a blood curdling scream come from inside.

‘I wasn’t quite sure what I was going to be confronted with,’ the mother-of-two told Daily Mail Australia.

Mrs Gay found her husband, Adam, on the treadmill desperately trying to save their three year old daughter Sienna – who had become wedged between the wall by the exercise machine.

‘I moved closer to the treadmill and it was on maximum speed and on an incline,’ she said.

‘My husband was using his hands on the wall and feet and all his strength to stop the belt to get her out. She was wedged against the wall and treadmill belt before he finally stopped it.’

Having been turned on when the kids were playing in the toy room, the treadmill belt was going at 22km/h causing friction burns to the stomach and right hand of Sienna.

Mrs Gay removed the key to turn off the treadmill before she was able to assess Sienna – a haunting memory she will never forget.

‘I went backed into the kitchen and looked at my daughter and it was the most horrific sight. I will never get it out of my mind,’ she said.

‘Her stomach was red and her hand was the worst – it looked like it had been through a grater.’

‘She was so distressed and thrashing and kicking. We all had to pin her down and I had to hold the oxygen mask on her face. It broke my heart looking into her eyes,’ Mrs Gay said.

After brave Sienna calmed down the doctors and nurses were able to wash and dress the wounds.

In the following days Sienna underwent surgery where they grafted skin from her bottom cheek to her right arm and spraying it onto her fingers and stomach.

Brave Sienna was moved to the Ronald McDonald house where she is now recovering and hopefully waiting on doctors approval to fly home next Thursday.

Unfortunately, Mrs Gay – who has not left her daughter’s side since the incident – said the whole situation has been draining on the three-year-old.

‘She is not doing very well she is crying in her bed. It is all just hit her, what exactly has gone on in the last few days,’ Mrs Gay told Daily Mail Australia.

‘I am crossing my fingers that everything is going to improve.’

Mrs Gay said she hoped the horrible incident would at least help other parents with inquisitive children to take extra safety precautions when it comes to exercise equipment.

‘Turn it off at the wall, pull the cord out and hide the key. Do not leave the key or any exercise equipment around young children. They are curious and intrigued.’