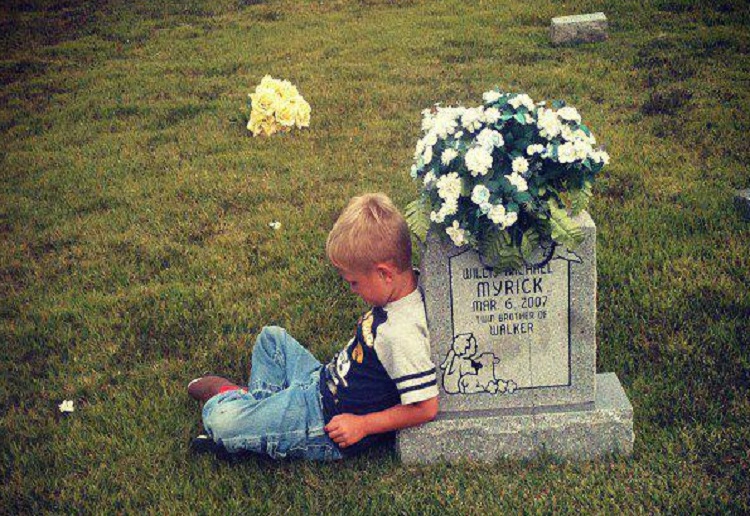 Viral photo of the touching moment five-year-old Walker Myrick was pictured telling his identical twin brother all about his first day of kindergarten.

The little boy never got a chance to meet his brother Willis who tragically died in their mother’s womb from a rare condition before they were born.

So when Walker started school in Alabama – a milestone they should have reached together – he was eager to share the moment with his twin.

His mother, Brooke Myrick, told Dailymail.com she took the photo in 2012 knowing she was capturing an important moment that showed their amazing connection.

Ms Myrick said Walker had run ahead as she was getting her baby out of the car and she found him resting against his brother’s grave telling him all about his day.

‘He told us he just wanted to tell Willis about school,’ she said.

‘It is special for me and that photo meant so much to me. When we lost him I just always wanted Walker to never forget Willis.’

Willis died in Ms Myrick’s womb at 24 weeks from twin to twin transfusion syndrome (TTTS), a condition that occurs when identical twins share a placenta but one is getting more blood flow than the other.

Even though they never met, Walker, now aged nine, regularly asks to visit his twin brother’s grave so he can speak to him and leave presents.

‘I do think they share a special bond. They were identical twins so I think it will always be there,’ Ms Myrick said.

‘I think he feels a sense of peace at the grave site. Even though years have passed, he has told us he believes his brother is always with him. He does speak of him often and shares his brother with his friends.’

Such a touching story. A great way to remember his loved brother.