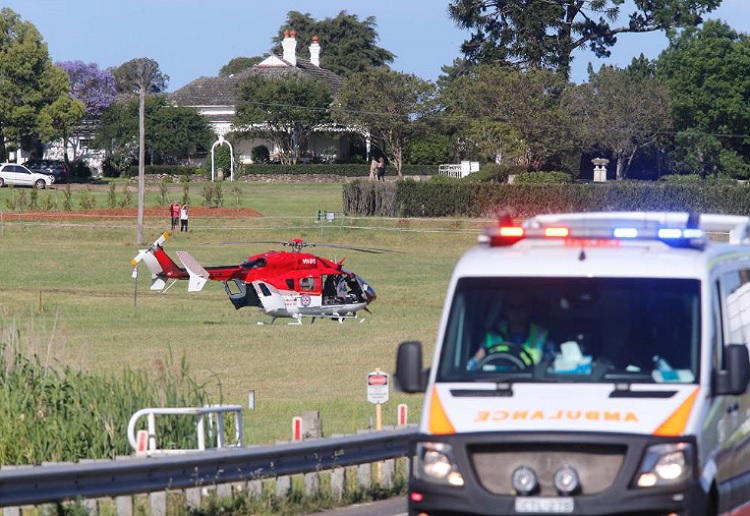 Two school buses and three cars were involved in a collision at Albion Park on Tuesday afternoon.

The accident has left 21 people injured, two seriously, including a number of children.

A seven-year-old boy was airlifted to Prince of Wales Hospital in Sydney with serious head injuries after he was flung through a window and onto the road when one of the buses ‘rear ended another bus at high speed,’ the Illawarra Mercury reports.

Another boy, aged 10, was also airlifted to Sydney with serious leg and abdomen injuries after he was ‘thrown about’ inside one of the buses.

Four children and one adult were taken to Shell Harbour Hospital by road ambulance with injuries including fractures and bruising, while two more children were taken to Wollongong Hospital, a NSW Ambulance spokesman confirmed.

Roughly 15 more kids were treated by paramedics at the scene.

The buses had just picked up about 40 children of varying ages from Illawarra Christian School when they collided at about 3.40pm on Tongarra Round at Albion Park, south of Sydney.

NSW Police confirmed that the drivers of both buses will be taken to Shellharbour Hospital for mandatory blood and urine testing.

In a statement posted online, the school’s principal Dr Kate Bertram confirmed that two children had been airlifted to Sydney hospitals and a number of others taken by ambulance for local treatment.

‘Our students’ well being is our highest priority at this time. We are taking every precaution to ensure each child is appropriately cared for,’ Dr Bertram said.

‘ICS staff will provide ongoing support to the school community in the weeks ahead.’

It has been reported the children are now in a stable condition.

We hope everyone involved makes a speedy recovery.