Article Vegemite Shapes Have Arrived And Our Lives Are Complete 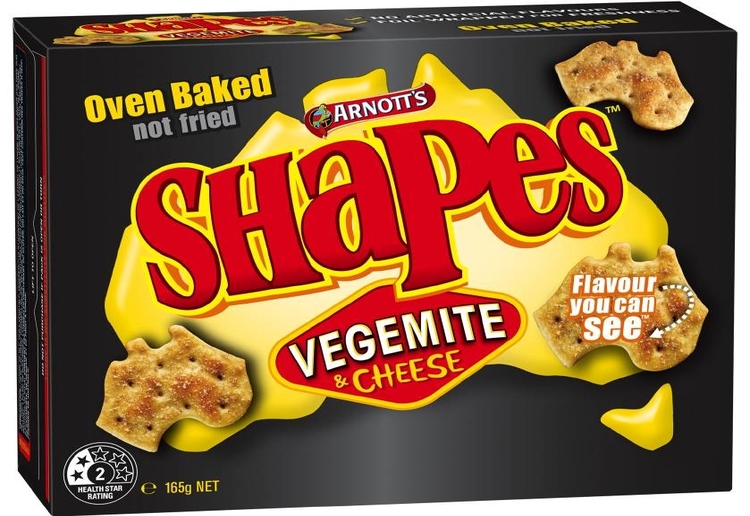 Two Australian classics have combined in one perfect snack and we can’t wait to try them!

If patriotism is dead, then one humble snack is here to restore it through the clever combination of two icons of Aussie cuisine. Industry insiders have described Arnott’s new Vegemite & Cheese Shapes to taste.com.au as “the spirit of a nation distilled down into a cracker” so if that doesn’t have you rushing out to buy a box, we don’t know what will!

Made For Each Other

The new crackers are not only the perfect blend of Vegemite and Arnott’s Shapes, but are even baked in the shape of Australia and will be sold in a packet designed using the Vegemite colours. “We believe the flavour pairing between Shapes and Vegemite are made for each other – and it’s a little baffling that we didn’t partner up before! These two Aussie snacking legends just go hand in hand and are a delicious choice, just in time for summer entertaining,” a spokesperson for Arnott’s said. “As we kick off 2019, what better way to celebrate than to launch a new legendary Shapes flavour, partnering with Australia’s favourite spread?” Not only are they delicious, they’re totally cute!

Arnott’s are known for coming up with some amazing reinventions of popular classics, so we can’t wait to try this latest mashup!  We think they’d be such a cute back to school snack or fun Friday night movie treat that the kids are guaranteed to love (and mums as well!) The collaboration is now available at all major supermarkets nationally.

What do you think of Arnott’s new Vegemite & Cheese shapes? Let us know in the comments!