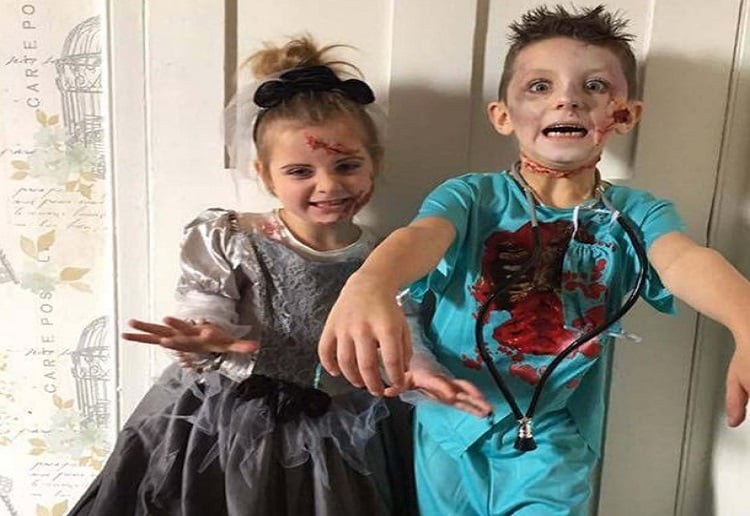 A four-year-old girl dodged death when her “zombie bride” Halloween costume burst into flames while she was trick-or-treating, her mother claims according to The Mirror.

Stacey Greenwood said her daughter Sienna-Rose, 4, is lucky to be alive after the costume allegedly spontaneously combusted due to heat from a lit pumpkin.

Sienna-Rose and her brother Harvey were standing on the doorstep of one house with some of the other adults when Stacey says Sienna-Rose’s costume suddenly set alight as she stood close to a lit pumpkin.

Stacey was around the corner with the rest of the group during the incident but immediately ran to her daughter as other parents battled to put out the flames by hitting them down.

Stacey said: “I just can’t get over how different it could have been – it is every mum’s worst nightmare. It does make you worry.

“She could have died or been scarred for life.

“Harvey keeps saying ‘I remember when Sienna-Rose caught fire’ and he said she could have died.

“I don’t think it has sunk in for Sienna-Rose but it is just so lucky she had her leggings on – without them it could have been so much worse.

“The kids were all standing by the door with some of the parents and the rest of us were a bit further away, then all of a sudden a lady was screaming ‘somebody’s costume is on fire’.

“It all just happened so quickly. It looked like the flames were all over her and there was so much smoke.

“Everyone patted her down straight away to get the flames out, she came running towards me as she didn’t understand why everyone was patting her.

“I just grabbed the fabric to make sure it was all out – I naturally wanted to take it off but I was worried about it catching her hair if it was still on fire.

“The flames were higher than that, the hole is about 4in up from the bottom of the dress.” 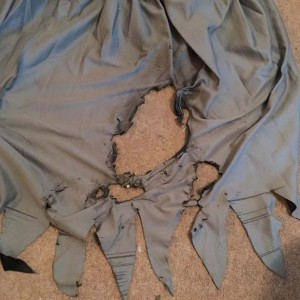 Amazingly, Sienna-Rose escaped unscathed but the dress melted itself to her leggings and was left with a huge 7in hole and three smaller holes from where the flames touched it.

Stacey said Harvey has been left upset by the incident and she is now concerned the children’s other fancy dress costumes could be a secret danger.

The mum-of-two said: “Inside the label of the dress it says ‘warning keep away from fire’ and to keep it away from candles and naked flames.

“But it also says the garment has undergone additional safety testing for flammability but that clearly isn’t enough.

“Sienna-Rose was wearing a long veil with the costume too which went down to her bum and if that had gone up in flames it could have been so much worse. It could have gone so many different ways.

“There has been so much stuff in the news about burning costumes and how they are not like that anymore, they are all having to go through these safety checks they are meant to be doing.

“It makes me really angry. I had seen stuff about Halloween costumes and fire hazards in the papers and on This Morning before this happened but I didn’t want to make too much of a thing about it because I didn’t want the kids thinking their costumes would explode.

“I never expected something like this to happen. It was such a shock – no one realised how bad it could have been until afterwards.

“Harvey and Sienna-Rose are always dressing up and have 20 or 30 costumes and it makes you worry for the other ones in their dressing up box.

“There would never be a naked flame around in my house but what about if she had been walking near the gas cooker in the kitchen or near our open fireplace – could it have caught alight from that?”

The ACCC issued a reminder to parents before you buy costumes this Halloween check that wigs, capes and loose fitting garments will not pose fire hazards.

I think this is a great reminder for ALL kids costumes, not just for Halloween.  Why not go and check your dress-up box and have a good clean out of any items that may pose a fire hazard.