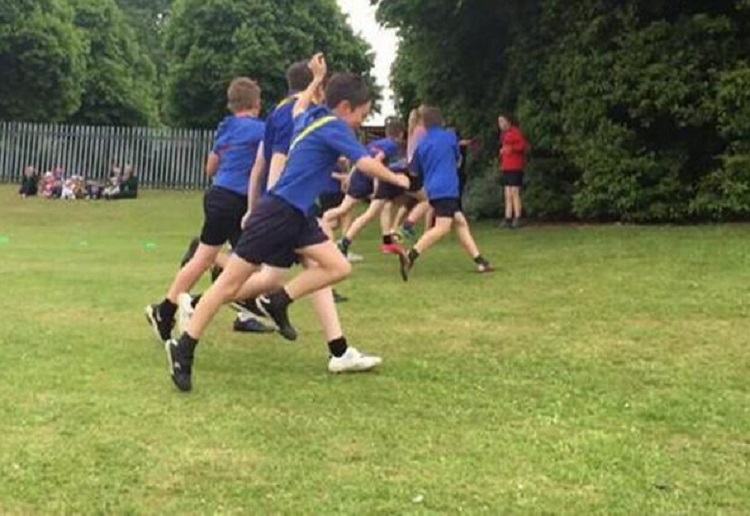 These 11-year-old boys decided to link arms to help their classmate win a race on their final school sports day.

The boys wanted to let their friend, 11-year-old Rory Kettles, who has Down syndrome, win gold, reports 9 NEWS.

In the video below you can see the boys running slowly as Rory speeds off ahead of them and crosses the finish line.

The boys are all attending their final year at Wrawby St Mary’s CofE Primary School in the English town of Lincolnshire.

One of the boys’ parents, Michelle Drury, said the boys had come up with the race idea themselves.

“I’m unbelievably proud of what Rio and the boys did,” she said.

“Being their last sports day they decided they wanted their friend Rory to remember his last running race by coming first.

“They all slowed down, put their arms round each other and ran together to make sure they came joint second.”

“Everyone at the sports day were crying their eyes out – these kids don’t know how amazing they are,” she said.

“Rory’s mum couldn’t believe it, but the boys acted like it wasn’t a big deal.”

“After he crossed the finish line he was really excited and just kept saying ‘I won! I won!’ and at home that night he said ‘I feel so happy that I won!'” she said.

“He’s been involved in sports day before but usually stops and looks round to see where everyone is.

“This year I said ‘It’s your last year, make sure you don’t stop’. Luckily he didn’t see them all coming up behind him as he would have stopped.

“I was really emotional when I saw the video and lots of the parents there were emotional too.”

“He’s in such a lovely class – all the children have always included Rory but they’re an especially lovely bunch of lads,” she said.

Awesome boys. I hope their parents are all very proud of them.