Article What you need to know about sending threatening emojis 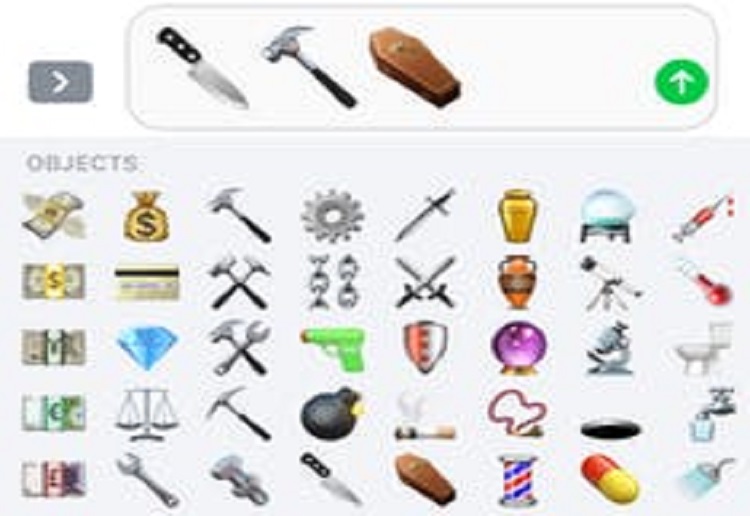 How the law responds when emojis are the weapon of choice.

A judge sent a New Zealand man to jail for threatening his ex-partner through the use of emoji in a message.

Nearly everyone is familiar with emoji, those popular icons that appear in text messages, emails and social media platforms. Emoji are often used as light-hearted adjuncts to text, or to soften the blow of a message.

A 2017 study found that use of emoji in work emails reduced perceptions of competence.

Read more: Why I use emoji in research and teaching

But emoji can be taken very seriously in the context of the law.

Our recent publication reports that use of emoji has challenged lawyers, judges, and lawmakers in several countries. In a legal context, emoji are increasingly recognised not as joke or ornament, but as a legitimate form of literacy.

Making a criminal threat via emoji

Perhaps the most troubling use of emoji has come through their use in interpersonal messages where it is unclear whether they modify or amplify a prima facie criminal threat.

In New Zealand, a judge considered the role of emoji in a Facebook message sent by a man to his ex-partner. The man wrote,

you’re going to fucking get it ✈️

Concluding that the message and emoji generally conveyed that the defendant was “coming to get” his ex-partner, the judge sentenced the accused to 8 months jail on a charge of stalking.

In 2016, a court in France convicted a young man of threatening his ex-girlfriend through a text message sent by mobile phone. The court found that the inclusion of a gun emoji meant that the message amounted to a “death threat in the form of an image”. The court sentenced the defendant to six months’ imprisonment and imposed a €1,000 fine.

The issue has also arisen in several cases in the US. In Virginia in 2015 a high school student was charged with computer harassment and threatening school staff. She had posted several messages to her Instagram account, combining text with emoji (a gun, a knife and a bomb). The messages reportedly showed:

The student claimed that she had never intended to make a threat and that the posts had been a joke.

In the same year, a 17-year-old in New York was charged with making a terrorist threat on his Facebook page after posting a policeman emoji, and three guns pointing towards it.

The prosecutor alleged that the message constituted a clear threat to police due to several factors:

However, a grand jury failed to indict the defendant, at least in part due to concerns about whether the post really demonstrated criminal intent.

Liability in other threat cases has been more readily established. A high school student was convicted of making a criminal threat after she sent a series of tweets including a variety of emoji and text including,

Her claim that the tweets were meant to be a joke was unsuccessful.

Perhaps the high point of emoji liability occurred in a case in Spartanburg County, South Carolina. The defendants, who had previously physically attacked the victim, sent him a message comprising only emoji: ???????? ???????? ????

They were subsequently arrested for stalking. And what exactly was the threat contained in their message? That the victim would be beaten (fist) leading to (pointed finger) hospitalisation (ambulance).

It is perhaps not surprising that those convicted of issuing criminal threats via emoji have all been relatively young; after all, many studies identify those under 30 as the most prolific digital communicators.

Emoji in a will

Earlier this year a judge of the Supreme Court of Queensland was faced with the problem of deciding whether a deceased man’s estate should go to his wife, or to his brother and nephew.

A key issue was whether an unsent text message on his mobile phone was made at a time when he was capable of making a will. The message bequeathed his house and superannuation to his brother and nephew and ended with the words “My will” followed by a smiley face.

The judge found that the informal nature of the will did not mean that it couldn’t be a valid expression of the deceased’s intentions.

Read more: How an unsent text message could cut you out of an inheritance

To varying degrees these cases illustrate the difficulty of determining the role of emoji in demonstrating intent. Does the addition of a smiley face detract from the seriousness of the purpose of a will? Do threats made with gun and bomb icons by adolescents genuinely constitute harassment or even terrorism?

These questions require us to identify the standards by which we will evaluate communications employing emoji. It can be a complex decision in the absence of linguistic, semiotic or other digital literacy expertise, and without the context of tone of voice and body gestures. Finding specific meaning intended by emoji in each case often involves some subjective interpretation in telling the difference between transient, insincere or ironic communications, and intentional messages.

Read more: How public feuds on social media and reality TV play out​ in court

It is possible that we may need to develop a “discrete legal space” in which accredited specialists in digital speech issues could assist judges. They could help weigh up evidentiary standards of probity and relevance in relation to emoji and their meaning.

Within that framework we might be able to develop a grammar or heuristic scheme that would allow us to confidently interpret the meaning of these icons, to reliably understand when they negate or amplify intent, and to decipher the human factor that emoji contribute to the law.

With claims that more than 9 million Australians use emoji, determining their meaning in a particular communication may increasingly emerge as a significant legal issue.

Do you find emojis threatening in some instances?