Article Michelle Bridges is enjoying a babymoon – so why is she being shamed? 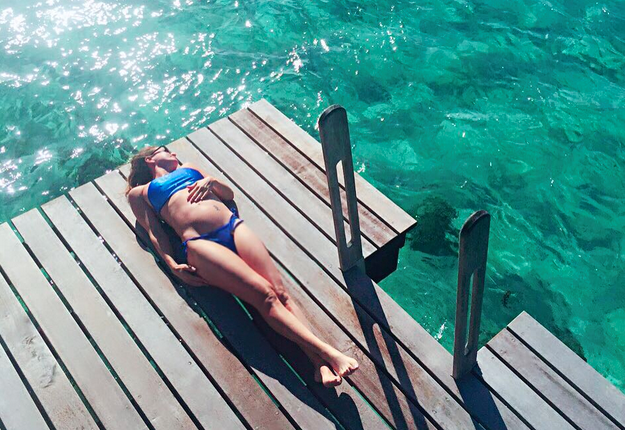 It’s the pregnancy that has Australia talking, Michelle Bridges is 5 months pregnant with her first bub and BOY have the haters come out to hate.

The super fit 44 year old trainer is currently enjoying a babymoon with her partner and father of the baby-to-be Steve ‘Commando’ Willis in Tahiti, and she is posting some seriously gorgeous snaps along the way, though these images are causing some controversy. Some commenters are questioning if it’s OK to be jumping into the water whilst pregnant, others are showing ‘concern’ over Michelle working out and lifting weights. Is it really anyone else’s business?

Last week a video that Michelle posted, showing the Biggest Loser trainer lifting weights, she ended up taking down due to the nasty comments people were making.

This is a follow on from when the couple first announced their pregnancy and Michelle commented on how she feels she was so lucky to have fallen pregnant at her age, though she also believes that it was partly due to the couple’s incredibly healthy lifestyle. Many people have taken offence to the comment saying that it  placed undue pressure on women who were trying to conceive and I can see where they are coming from. I know of many wonderful friends who’ve had trouble conceiving in their late 20’s and into their 30’s that lead wonderfully healthy lifestyles and the reasons behind not being able to conceive are complex. They aren’t happy with that comment, I can see why, though when it comes to commenters on Instagram questioning if the super fit mum-to-be is doing the right thing I don’t think anyone should be taking offence – it’s her choice.

Michelle is clearly one of the fittest women in Australia, why should we worry that she is doing the wrong thing by exercising and enjoying herself? We should be rejoicing at what that woman can accomplish! It’s actually incredible to see a six pack on top of her baby belly and good on her for being able to continue to do what she does best throughout her pregnancy.

I say all power to you Michelle, keep up the good work, enjoy your babymoon (it looks spectacular) and ignore the haters – they’ll hate on you no matter what you do, so you may as well do it well!