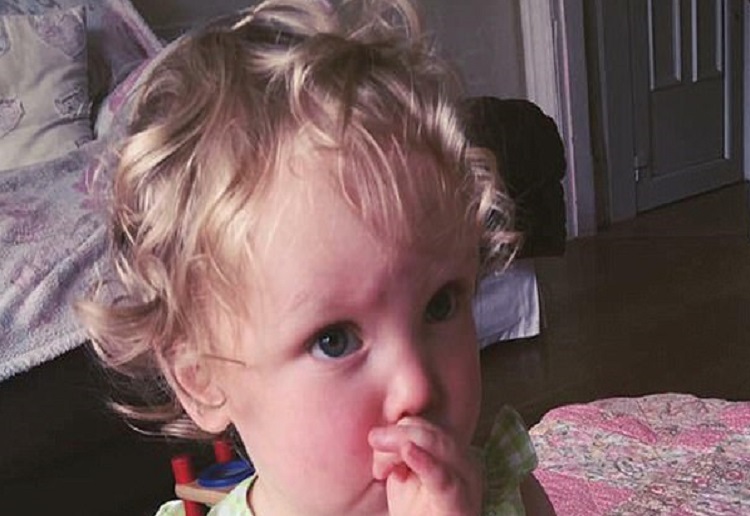 Desperate to stop her two-year-old daughter from compulsively pulling out her own hair, a mother has made the heartbreaking decision to shave off her ‘beautiful blonde curls.’

Believing her daughter Isla has trichotillomania – an impulse control disorder where the sufferer feels compelled to yank out their own hair they felt shaving her head was the only solution to save her hair.

Sadly, the drastic measure has done little to curb Isla’s extreme behaviour which also saw her wrap her locks around her fingers as she sucked her thumb.

The toddler, who is still partially bald, is yet to receive an official diagnosis from doctors, simply tugs on her mother’s hair, or pulls it out of hairbrushes instead.

Kerry has also covered Isla’s hair in Vaseline in an attempt to make it too greasy to pull but this has not worked.

‘It was a really difficult decision to shave Isla’s hair. She had beautiful, blonde curls’, said Kerry.

‘Once her hair was no longer there, she started taking mine, or pulling it out of hairbrushes.

‘I’ve tried everything to stop her, but nothing seems to work. I know trichotillomania is often linked to anxiety, but Isla is the happiest child going, so I don’t know what’s causing it’, she said.

Kerry recalled how, when Isla was an infant, she would wrap her hair around her finger as she sucked her thumb.

At first, the family weren’t concerned, thinking that the habit was ‘cute.’

It took a lot to do, but I made the difficult decision to shave her head.’

For a while, Isla seemed fine, until she started to pull out Kerry’s hair instead – then, once it began to grow back, yanking out her own locks again.

Now her worried mum has tried everything, from coating Isla’s hair in Vaseline, so it is too greasy to pull at, to encouraging her to play with a blanket or dummy instead. 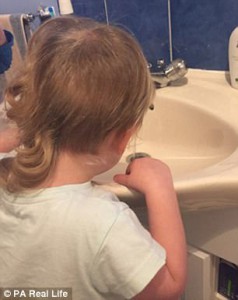 But so far, nothing has worked.

And, while health visitors agree it is highly possible Isla has trichotillomania, doctors – who have not made a formal diagnosis – still hope this could be a phase she will grow out of.