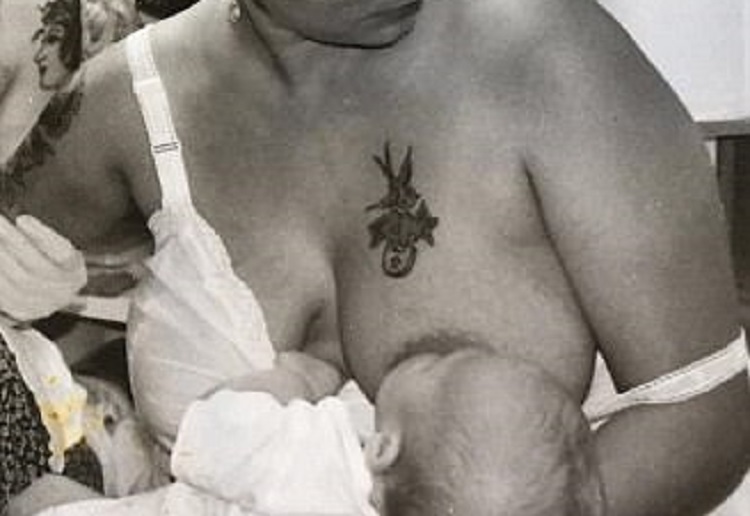 The picture, taken 20 years ago, still has people outraged crying child abuse and saying it was dangerous and risking the infants life.

The image was shared on Instagram last month by Liberty Tattoo in Atlanta, Georgia.

Tattoo artist, Kaki Cannon, can be seen working on the then, new mum Su Mendez’s, arm while she breastfeeds her infant son, reports Daily Mail.

Su can be seen calmly looking away while her best friend, Kaki, works on her arm, cradling her newborn baby as he nurses from her breast.

‘Here’s Kaki doing one of her first tattoos 20 years ago at Ms. Deborah’s Fountain of Youth Tattoo on her best friend Su,’ the caption explains.

The impressive photo has now earned almost 8,000 likes on Instagram, with comments deeming the scene ‘awesome’ and ‘crazy’ at the same time.

Su tells Ravishly, “I’ve never really cared about what people think of me. If you read the comments, 98 percent of the people thought it was awesome, and like 2 percent said the baby would die. But he turned out pretty okay, I think. He’s 21 now.”

She added, “I think it’s really interesting that 20 years later this picture is still an object of fascination. We think we’ve come so far in these politics, that we get to be who we are as women and not explain ourselves or apologize, but we’re still circling around the same issues.

“Some people got pretty messy about it. Someone said it was child abuse. That it wasn’t clean.

It is my body. My child is entitled to the best in this world, and what’s better than the loving embrace of a mother and getting loved and fed?”

Here’s Kaki doing one of her first tattoos 20 years ago at Ms. Deborah’s Fountain of Youth Tattoo on her best friend Su. #tattootimemachine

How do you feel when you look at this image?