Woman dies after allegedly jumping in front of train while holding baby.

A woman has died and a baby has been rushed to hospital in a critical condition following an incident at Harris Park Railway Station this afternoon.

Emergency services were called to the train station around 2.15pm after reports a woman jumped in front of a train while holding a small child.

The woman died at the scene, while the female child was transported to Westmead Hospital in a critical condition.

Police from Parramatta Local Area Command are investigating the incident and are reviewing CCTV footage. 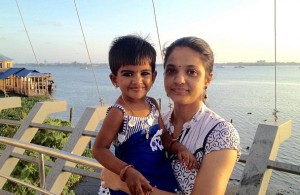 The three-year-old daughter, Shreya, was pulled from under the train and taken to The Children’s Hospital at Westmead with life-threatening injuries. She is still fighting for her life.

The young mother was a former assistant software engineer and posted dozens of happy snaps on social media, travelling the world with her husband and daughter.

Her former employer Tata Consultancy Services (TCS) released a statement yesterday offering their condolences to her husband, who works for the same company.

“The TCS community is shocked and deeply saddened by this tragedy. Our thoughts are with Archana’s family and friends at this time,” CEO Deborah Hadwen said.

Police confirmed the incident was self-harm.

If you or someone you love needs help please reach out. Call  Lifeline Australia on 13 11 14.