Incredible! A talented Aussie woman has turned a few humble Kmart tea towels into an absolute stunner of a dress. And it cost her just over $15 to make this one-of-a-kind creation.

It certainly takes talent to look at Kmart tea towels and see a whole host of possibilities. I, for one, just see a tea towel – a dish dryer and nothing else.

But Selika Harris, from Croydon in Victoria, transformed 11 Kmart tea towels, priced at $1.50 each, into a spectacular frock, costing only $16.50 for the unusual fabric.

“I saw some people on the Australian sewing advice and inspiration Facebook page used this tea towel to make bucket hats so I was thinking I could make a dress from it as it’s so pretty,” Ms Harris told the Daily Mail. 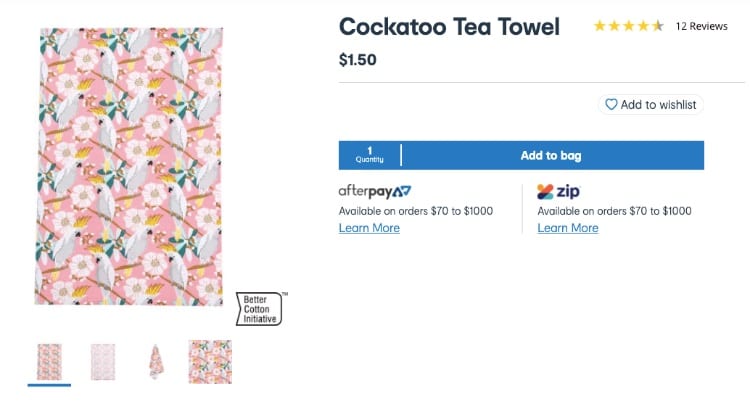 How The Kmart Tea Towels Dress Was Made

Ms Harris already had an idea of what she wanted the dress to look like so she immediately got on with the task of sewing the Kmart tea towels together and then added a zip at the back.

Ms Harris explained how she made the dress saying that she “pretty much sewed two big pieces of three tea towels for the gathered skirt, back and front pieces.”

She then “sewed two pieces each for the bodice back and front, plus sleeves,” she added.

She said that she usually uses regular fabric when she makes clothes, but this is the first time she had created something using “odd materials”.

This Beautiful Print Should Be More Than Just A Tea Towel

Ms Harris then shared pictures of the dress on a Facebook group, saying:

“No way I’m letting this beautiful prints being just a tea towel. When $1.50 tea towel tuned into a one in a million dress. I’m calling it a tea towel dress – made with 11 Kmart tea towels.”

Her post attracted over 1.5K comments, all gushing over how amazing the dress is.

“You are super talented!!! I love the style and the print! Do you make to order….?” wrote one fan.

“Some ppl are just blessed and you Selika are one of those blessed ppl!! What a dress super talented!!!
Kmart just officially sold out of their tea towels,” said another.

“This is not only a beautiful dress…. But your talent to make this, it is absolutely immaculate. well done!”

Other Uses Of Kmart Tea Towels

Others shared that they have also used the same Kmart tea towels for creative uses.

“I used a couple of the exact same tea towel to make some face masks and got the rest of one turned into a shoulder bag and a coin purse,” one said.

“I thought making a floor cushion was a good idea but this is way better!” added another.

The talented Selika shares her other incredible creations on her Instagram Page. Check it out.

Do you have any ideas for creative ways to use Kmart tea towels? Tell us in the comments below.