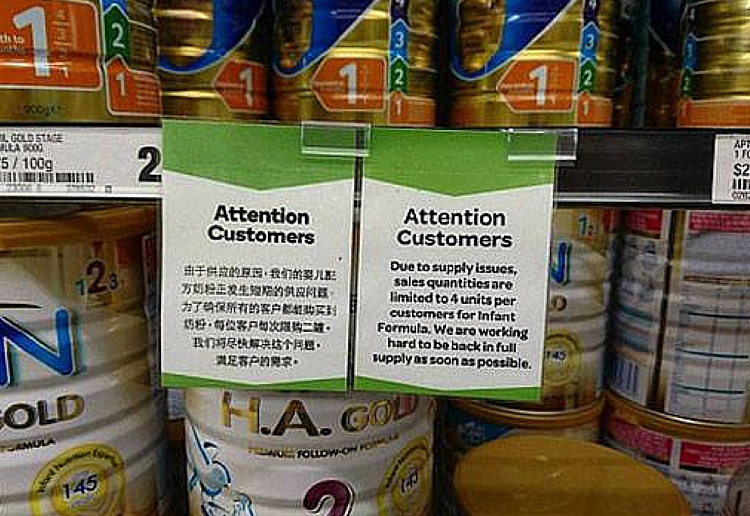 According to the Daily Mail, Australian supermarket giant Woolworths has been accused of racial discrimination after shoppers saw signs in Mandarin and English that had different baby formula tin buying limits.

Customers have posted photos of the signs both in Mandarin and English clearly showing two different purchasing limits.

According to the Daily Mail, the sign written in English states; ‘Due to supply issues, sales quantities are limited to four units per customers for Infant Formula. We are working hard to be back in full supply as soon as possible,’ the tickets, spotted across Australia this month, read in English.

However, the ticket beside it written in Mandarin, the most common Chinese language, informs customers they are unable to buy more than two.

Woolworths have responded to the accusations, by calling the signs a ‘ticketing error’.  The supermarket responded on social media to concerned shopper’s demands for an answer, “We apologise for this ticketing error,’ they said, ‘This was rectified and new signage with the correct formula limit is at all stores.’

A range of various social media complaints have been received by Woolworths regarding the signage.

One complaint to the Woolworths Facebook page by a Chinese Australian mother stated that an employee that she could not buy more than two tins of baby formula.

‘Your policy said four tins per customer. But while I made purchase today I was told by your staff it’s two per customer,’ the mother wrote.

The Herald Sun has been told by Woolworths spokesman Russell Mahooney that the “ticketing was an error and that they had been ordered to be removed and destroyed earlier this month.” With customers still spotting the tickets in recent days, Mr Mahoney said “stores would again be asked to remove the tickets.He said all customers would still have been able to purchase up to four tins.”

The shortage of baby formula has been noticeable to many parents across Australia as a result of the rising demand for the product in China.

The tins have reportedly been bought in bulk and shipped to China at a higher cost – some are available on sites such as EBay for $200 AUD.