Article “Yes I Have Six Kids And Yes They Are All From The Same Dad!” 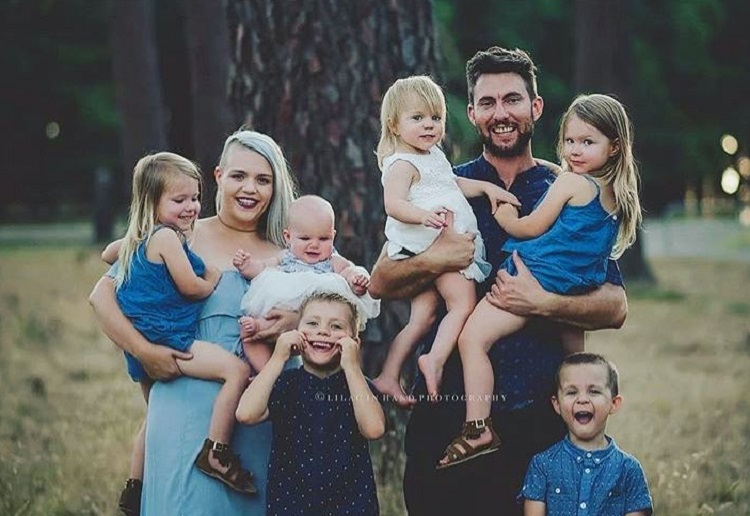 What did she just say ?!?! This mum has had enough. “It’s not okay to make someone feel like the amount of children they have is wrong or right. It’s actually no ones goddamn business.”

Krechelle from Eight at home wants you all to know once and for all, “Yes I have six kids under the age of six- and yes they are all from the same man; thanks so much for asking.”

Krechelle admits, “Having six children this young is a struggle! We struggle to get to the shops, we struggle out to dinner, with school runs and keeping the house clean; but, I mean, doesn’t everybody?”

But you know what the biggest struggle is?  Other people’s unwanted opinions.

Krechelle says, “I’ve tried to not let it get to me,  I’ve tried to ignore it and smile and keep walking but I’ve found the only way to deal with constant negative comments is to give them what they really want to hear.”

Let Krechelle set the scene for you:

“The husband and I are waiting for the shops to open with one trolley containing two kids, one pram with two kids and two running around in circles.

A smug lady in her forties comes over;
“They are not all yours are they?!?!” She says with a smug disapproving look.

“Yep, sure are; born and bred from my uterus; surprisingly enough my pelvic floor is still fantastic – isn’t it babe (I look at Dave with a wink )”

“Actually we own three; however who would pass up mind blowing sex for tv; are you nuts ? ”

Is this man your husband?

“No actually my husband’s at home, he deserves a rest- this is my lover- Fernando”

Your not having anymore are you?

“I mean my husband has had a vasectomy if that’s what your asking but Fernando, my lover, has not so I guess we’re just throwing it to the wind”

I could go on.

But you get my gist.

It’s not okay to make someone feel like the amount of children they have is wrong or right. It’s actually no ones goddam business. Whether you have zero children or ten children. If they are happy and healthy and loved!!

We should all be supportive of one another.

Krechelle is obviously not alone, her post has hit the nail on the head with so many other families. Her original post on Facebook has received over 1700 shares and 14,000 reactions.