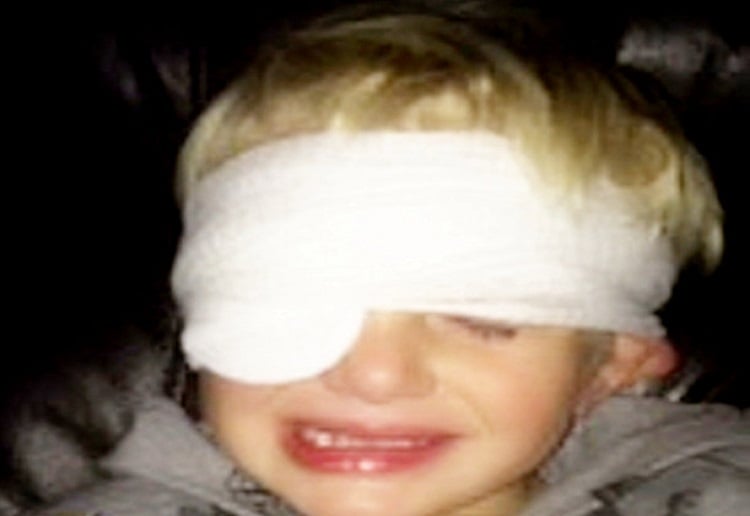 Four year old boy left terrified after doctor glued his eye shut by mistake while treating a minor cut on his forehead.

Little Jay Watson gashed his head while on a day out with his older brother Jordan, 11, and their gran Jayne Gilder, reports The Sun.

A doctor used medical glue to seal the wound, but accidentally dripped the powerful sealant into Jay’s eye.

His family were told it should open by itself within a few hours. But it was five days before the glue finally dissolved.

His family have blasted the hospital for the blunder, saying Jay – currently being assessed for Asperger’s syndrome – has been left “traumatised” by his ordeal.

Gran Jayne, 59, said: “It wasn’t a big cut but it was deep and it wouldn’t stop bleeding.

“We were sat in the hospital waiting room as Jay was good as gold.

“But then we were called in and a young doctor squeezed the tube of glue on the cut to close it, but he pressed too hard and the glue ran down Jay’s face into his eye.

“The next thing we knew, his eye wouldn’t open.

“The doctor got a tube of saline solution to try and wash the glue out, but it didn’t budge.

“The whole thing should have been over and done with in ten minutes. Why they didn’t put an eye patch or something to protect his eye, I don’t know.

“What amazed us even more was the fact that the doctor told us it wasn’t the first time this had happened. It was like he was proud of it.

“The stress that child went through to try to and open his eye is unbelievable. He screamed the hospital down, all because of incompetence.

“He came out looking like he had been in a war zone. He left looking worse than what he did when he was admitted.

“What’s worse is that the doctor told us to go home and that Jay’s eye would open by itself.

“That night, he didn’t sleep a wink and he was in agony.

“We decided to take him back to the Alexandra Hospital where they told us we had two options, to force his eye open or to wait for it to loosen in due course.

“Jo couldn’t face another night like that, so we agreed to try and get the eye to open.

“He was screaming the place down. It was a horrific scream.”

After another restless sleep, Jayne and Jo took him to the Worcestershire Royal Hospital for a second opinion, but the family were again told it was a matter of waiting for the glue to slacken.

Jayne said: “We were told it was just a waiting game.

“We took him home and he was walking round with both of his eyes closed because it was less painful for him.

“It wasn’t until the Monday that his eye eventually opened.

“He was in excruciating pain. The whole thing could have been avoided so easily and that’s what his mum is annoyed about the most.”