Mum shares her eight-year-old boy was allegedly sexually assaulted by a ‘buddy’ in his class, who threatened to ‘kill him if he told anyone’.

The young boy has been left suicidal and afraid to go to school. He has also been left too scared to use any public toilets.

The horrific sexual abuse occurred over three weeks in 2014, according to the distraught mother-of-three, who claimed her son had told three teachers but been ignored.

After three weeks of ‘daily’ abuse the young boy, who had already told three teachers but been ‘brushed off’, told his mother another boy had ‘touched him when he went to the toilet’.

‘At that point I didn’t know the extent of what happened – I was in shock,’ the mother told Daily Mail Australia.

‘We called the police and he told them what the other boy had done to him, and I just cried.’

The young boy, who lives with high-functioning autism, and his mother then met with the school principal.

‘The principal told him he was lucky he was autistic because he ”wouldn’t feel the impact of sexual abuse like other children”, but three years later he is still feeling it,’ she said.

The boy is still scared to use any toilet other than the one he has at home, he has searched online about ‘ways to kill himself’ and has crippling anxiety.

The mother has moved her children twice since the abuse occurred – so her son wouldn’t have to come face-to-face with his young attacker.

But she has since taken him and his younger brother, six, from yet another school.

‘I got a phone call from the counsellor telling me that my son had told them he wanted to kill himself – I just want him to be safe so I have kept him home.

‘A few days later I got a call from the truancy officer who told me that I had to send him to school or they would bring police to my door step to make them go.

‘They threatened me with having the kids taken off me – but the only reason he is scared of going to school is because the system let him down in the first place,’ she told Daily Mail Australia.

A heart-breaking note written by the young boy to other children experiencing sexual abuse highlights how much it impacted him.

‘I tried to hurt myself I hated this,’ he wrote. ‘They made me change schools but I wanted to stay but the boy who did this to me got to stay.

‘I’m sorry you’re sad. I went through emotions like you.

‘My principal said I’m lucky I have Autism because I won’t feel what a normal person would feel but I don’t feel lucky,’ he wrote. 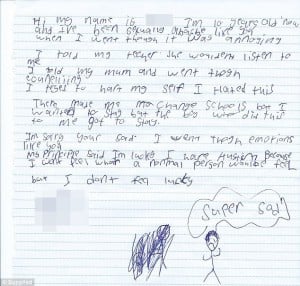 The young boy has been suffering for the past three years following the abuse.

The year three student, at the time, was excited to go to school in the beginning but after a few days ‘ changed his mind’.

His mother now realises she missed ‘the signs something wasn’t right’ for three weeks.

‘He was crying and didn’t want to go to school, I just thought he was doing what young boys sometimes do and trying to get out of going.

‘The teachers told me to just keep bringing him so I did.’

The young boy went from being bubbly and happy to sad, neurotic and anxious. ‘He undid his bed and slept on his mattress on the floor.

‘And went through a stage of making sure all the windows were locked.

‘Once I found out about what had happened he told me the boy had threatened to kill him if he told anyone and had told him he would hide under his bed or outside the windows at night.’

The young boy started wetting the bed and was petrified he would put his family in danger if he told his mother what happened.

‘He told three teachers and none of them did a thing,’ the mother said.

‘The first time it happened a teacher walked in on the other boy touching him when he went to the toilet – but my son was the one who got in trouble.

‘Another day he ran to the teacher on duty in the playground and was told to ‘stop making things up’.

‘The third teacher, his classroom teacher, was too busy planning the end of term disco to listen to him.’

The mother said her son was desperate to be liked and didn’t want the other boy in the class to make everyone else hate him.

‘Once the school found out they said it would be best if he went to school and was still in the same class as this other boy.

‘The school counsellor told me he had to face the child. I had to drag him in to school.

‘I felt so torn on one hand there were officials telling me what to do on the other hand was my son who was clinging on to the car door, screaming and refusing to go in. We didn’t try again.’

The family changed schools and the young boy went to counselling.

‘He was struggling with what had happened to him – he was asking if what happened meant he was gay and we had to keep telling him it wasn’t his fault.’

The school was in the same area as the one where he was abused, so the young boy kept running into his attacker on sport days. A year later he tried to hurt the boy he still feared.

‘One day he wrote me a suicide note and left it in his bed it said he loved me and he was sorry.

‘I got a call from the school – he had taken a knife in and was going to hurt the other little boy then kill himself.

‘When I got to the school police were giving him a stern talking to, until I told them what he had been through – then they just wanted to get him help – I was so angry the school didn’t say anything.’

The mother moved her son to yet another school. ‘I just needed to get him out of the area I didn’t want him having to see that little boy anymore,’ she said.

‘He says he doesn’t understand why he feels the way he does and he just wants it to stop – we had to get rid of all the knives from the house.’

The boy still won’t go in ‘any toilets without a lock’ or any public toilets, preferring to wet himself than relive his traumatic experience.

‘The little boy that did this was under 10 at the time so he wasn’t legally responsible for what happened, but the school said they would look into his family.

He calls home his safe place which is why I am letting him stay here, I am going to home school him.

‘I’m afraid if I force him to go back to school he just wont wake up one day.’

The mother who lives in NSW said she feels the education department has ‘let her family down’.

‘I feel unsupported, I feel like this horrible thing happened to my son then we were the ones who had to leave,’ she said.

The mother said she always taught her children about stranger danger but the message has to be changed.

‘I never talked to them about their friends or how they could abuse them – I never told my kids they were more likely to be hurt by people they know,’ she said.

The mother also said she felt ‘let down’ by the teachers her son told – because if his complaints had been investigated earlier ‘he could have avoided a lot of pain’.

The mother has booked her son in to see a psychologist following his recent admissions to the school counsellor – but is still on a waiting list.

She is speaking out following the phone-call from the department’s truancy officer which demanded her son return to school and ‘use the school bathrooms’ like other students.