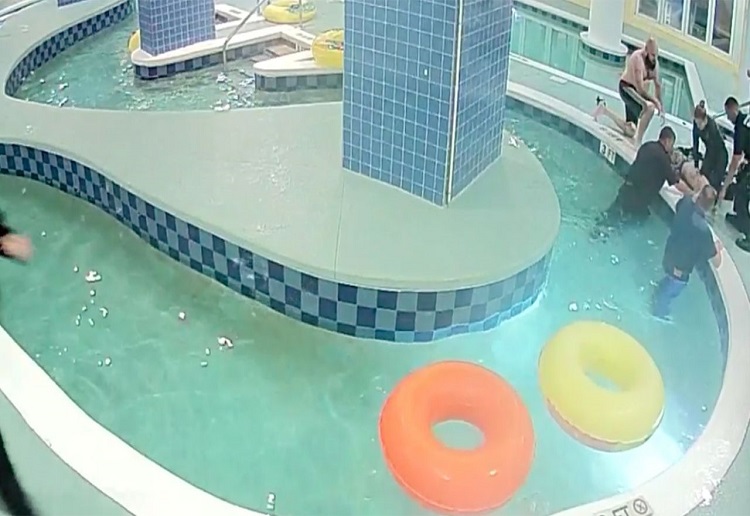 A young boy is lucky to be alive after his leg became stuck in a suction pipe leaving him underwater for nine minutes.

The 12 year old was trapped underwater for more than nine minutes as rescuers tried desperately to pull him free.

Police released footage taken in the swimming pool at the Avista Resort in California, showing two boys playing around in the “lazy river” on March 19.

The boys can be seen exploring the base of the pool before they pry the safety grate off, reports Yahoo 7.

The harrowing footage shows adults jump into the pool from different directions and attempt to get his leg free.

Police were immediately called, but with time an urgent factor, one adult submerged himself again and again to provide the boy with mouth-to-mouth.

Police said the boy is alive and in hospital, but did not reveal any further details about his condition.

Alyssa Pappas said it was a very traumatic experience and a total miracle that her son is still alive today.

Evan spent three days in a medically induced coma and eight days on a ventilator.

The boy lifted the grate to retrieve a piece of his goggles.

She wants to make sure their horrible experience is a warning to other parents.

It was scary. It seemed to happen fast but take forever at the same time,’ Pappas said. ‘Just to see him being pulled out of the water, it was very hard.’

‘It should’ve been safe,’ she added. ‘No one should be able to lift something so dangerous.’