Just when you think you can’t endure yet another Corona-post on your Facebook feed, up pops a post that makes all that scrolling worthwhile. This rather odd Aldi Special Buy has caused light-hearted confusion across the globe…and lots of hilarious puns and giggles.

A photo of the seemingly innocent but overtly x-rated special buy has made the social media rounds and Aldi shoppers have been left shaking their heads in dismay and snorting with laughter.

The pic was supposedly originally shared by an Aldi shopper overseas and features a footstool covered with fluffy faux fur. And here’s the kicker. The product has been very clearly labelled as a “Blow Job Stool.” 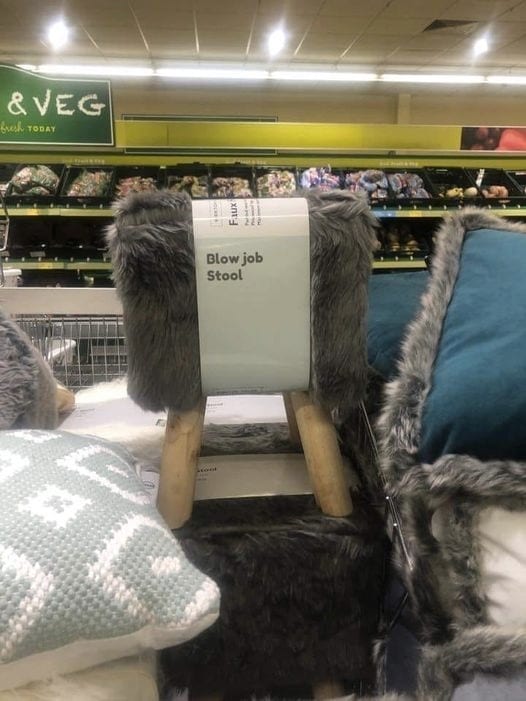 I’m Just Here For The Comments

The photo was posted to the Aldi mums group and the fans have delighted in commenting on the pornographic discovery.

Many have pointed out that this would be the “ultimate Christmas present.”

“Christmas is coming up, time to treat those men ‘for the man who has everything’ hahaha”

“Wow. I just burst out laughing. I’m off to Aldi now. This is the Best Ever Special Buy.”

“I bet the queues will be twice as long as usual to get this, I wonder how many fights will happen?”

“About the only time my husband would enter a store to buy anything.”

“My husband wants one for every room of the house”

“I wonder how long before they pull those .. no pun intended.”

“I have to say that the choice of fabric wasn’t really thought through well… maybe a synthetic leather would’ve been smarter.”

“Well, they certainly know how to provide a good service now don’t they!”

We All Need This VERY Special Buy!

No one really knows whether Aldi made a pretty unfortunate typo or translation error or even if the photo has just been photoshopped. But whatever the case, we all need a bit of laughter in our lives right now!

In another post that made us smile, a mum innocently asked whether Aldi stocked certain intimate products and the reactions were hilarious.

The comments were absolutely hilarious.

Aldi isn’t the only store that caught our attention with its x-rated products. Target recently came under fire by a ‘Karen’ who wasn’t that keen on an x-rated display at her local store.

The shopper attacked the discounted chain store when she encountered the vibrators on sale in the US version of Target.

Did you have a cackle at this Aldi special buy? Tell us in the comments below.