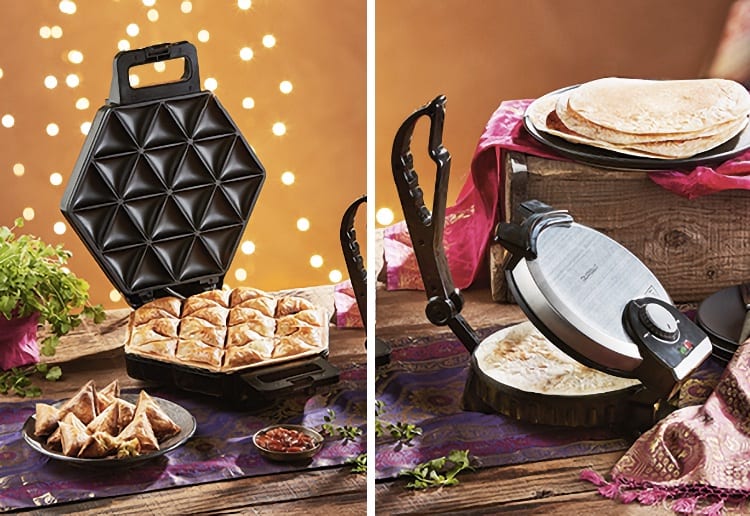 My kitchen is overflowing with appliances – first there was the pie maker, then the family pie maker, then a new deep dish jaffle machine and now Aldi is launching a samosa maker! Aaargh, my husband is going to go crazy when I bring it home!

So for those who have never tried one of these traditional Indian delicacies, they are fried, usually triangular-shaped pastries with a yummy savoury filling, such as vegetables, mince, chicken, potatoes, peas or lentils.

To prepare them the samosa is usually deep-fried in oil until crisp and crunchy and served warm accompanied by chutney.

But they’re a bit fiddly to make and who really wants to sit over a pot of boiling hot oil. And let’s not even talk about the calories.

But Aldi is making samosa-making accessible to all of us, launching a Samosa Maker as part of its Special Buys Catalogue next Wednesday 30 September.

Make Your Own Samosas Easily

The samosa maker comes with non-stick cooking plates, automatic temperature control and can make up to 24 samosas.
It is priced at $39.99 (which happens to be a $10 increase from last year).

Plus best of all, the samosas are baked, rather than fried, making them a fair healthier treat.

To use the machine, all you need to do is add a layer of any kind of pastry to the machine, top it with a layer of filling (sweet or savoury). Then add another layer of pastry. Close the samosa maker and after a few minutes, you’ll have 24 delectable triangles of goodness. YUM!

We found a video of how to use a samosa maker. This particular one looks almost exactly the same as the Aldi one so we reckon this would probably work very similarly.

Roti is a soft, flat Indian bread, traditionally cooked on a tawa, but electronic roti makers are becoming increasingly popular. You just need to place a ball of roti dough into the maker and one minute later, you’ll have a warm fresh roti.

Accompanying the makers on the Aldi shelves, will be a variety of Indian foods, including spices, simmer sauces, dahl and poppadoms for $2.99 for a 70g pack (available in three flavours – Sweet Chilli, Original or Barbecue).

Are you keen to buy the samosa or roti maker? Tell us in the comments below.