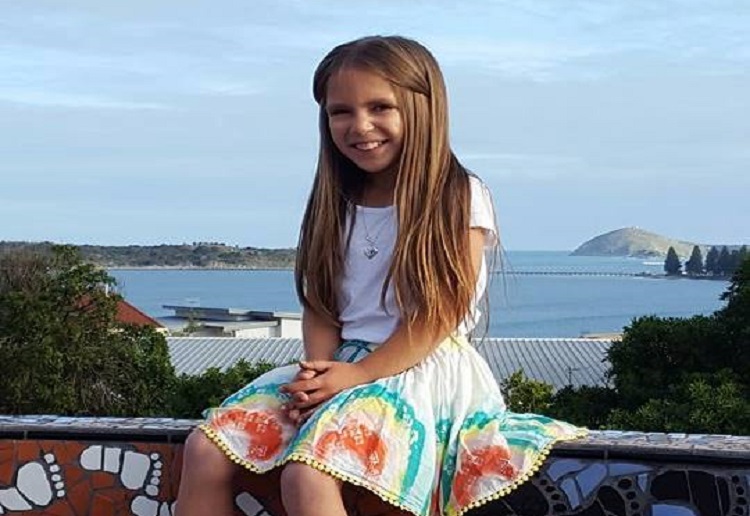 Meet the amazing young girl raising money to help a friend fulfill her dream to walk.

Maddie is a nine year old girl from South Australia who suffers from rotational scoliosis.

This means Maddie is quite small for her age, one side of her chest protrudes from her little body, she often suffers chest pains and has severe anxiety from the many hospital visits she has endured. Poor Maddie has been through more than any child should.

But this is not the only thing that makes Maddie special; she has one of the biggest hearts. Whilst Maddie has her own ongoing medical condition, she still sees what others go through and wants to do her best to help them too.

Maddie  is currently doing a fundraiser for a six year old girl in Brisbane with cerebral palsy.

Her gorgeous long hair is down to her bottom and she is cutting it off to raise money for Harlie to have an operation so she can stop having the painful injections she endures every six months. The operation has a high chance of helping Harlie walk which would be a huge dream come true.

Maddie’s mum showed Harlie’s documentary to her and Maddie said “Mummy, I want to do this for Harlie.”

Now what can a nine year old do to help change the life of a friend? Well Maddie is your typical nine year old girl when it comes to her hair. She’s very proud of her long locks and the fancy styles she struts at school.

Maddie has decided to seek sponsorship from her local community and from Harlie’s followers, to cut her hair off to above her shoulders!

Now any girl out there understands it’s always a big decision to chop off years of growth, but Maddie feels this is something she just has to do.

Harlie and Maddie met about four years ago at a birthday party. Maddie approached Harlie, handing her a cup of jelly as if to say, “You’re still included.”

If you would like to sponsor Maddie, head over to Harlie’s website and follow the links to the donate page for the direct transfer details. Let’s #stepup4harlie and #stepup4maddie

Such a kind gesture. You can support Maddie and Harlie here.