Article Are we toilet training our kids wrong? 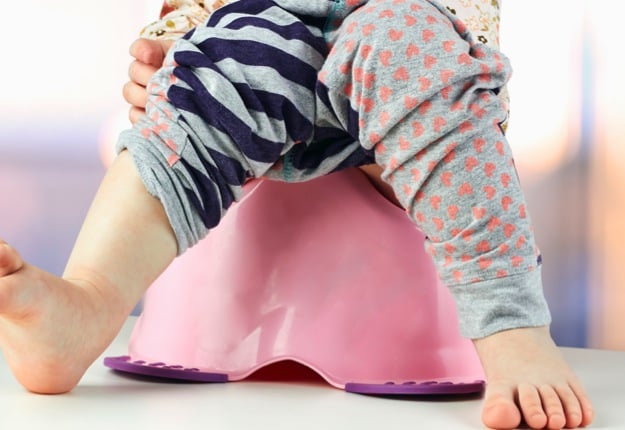 The western pedestal toilet was designed to fix a sewage and plumbing issue to minimise disease in England in 1850.

Before then squatting over a bucket, chamber pot or an outhouse was normal for most people; only the royal family, the sick or the very wealthy sat on a chair with a chamber pot underneath.

Many of the human population today still squat to go.

The western loo may have fixed the sewage problem of the 19th century but since then it has not helped us with our inner plumbing.

Have you ever thought of changing the angle on how your family goes to the loo?

The human body was designed to squat when going to the loo. It makes sense; over half the world’s population still does it that way.

There is also growing awareness that we in western countries should be squatting to go too.

Research has shown that going to the loo with your knees up, higher than your hips, will benefit your whole family in so many ways.

Statistics compiled by the World Health Organisation have shown that people in countries who squat have less colon cancer and other related digestive issues than those in western developed nations.

In the squatting position you are allowing all your pelvic floor muscles to relax in their correct way.

When sitting on a pedestal loo, you are not allowing your puborectalis muscle, a muscle in the pelvic floor, to relax, so kinking the colon passage.

This makes it harder to pass the stool at the end of the movement and you have to strain to finish. Long term straining is not good; it makes the pelvic muscles weak and so in the long term can cause leakage and incontinence.

A child or shorter person can have difficulties with getting their knees higher than their hips when on the western loo and kid’s feet don’t even touch the floor!

So we were trained to sit on a western loo and in turn we train our kids to sit on the western loo, inadvertently setting up what we all think is normal. When really squatting is normal and sitting is restricting our natural easy functions.

The Australian Department of Health and Ageing suggest we use a footstool or phone books to get the knees higher than the hips in their 2012 Guide to Improving Bowel function.

So even the Aussie Government know we should be doing it with our knees up even if they are a little out of touch.

But they are ahead of the game when it comes to preventative health.

And so should you!

A Footstool Huh! What a simple and low tech solution for the prevention of piles, incontinence and other diseases that can be caused by straining.

Using a correctly designed footstool as suggested by the Department of health is the easiest answer.