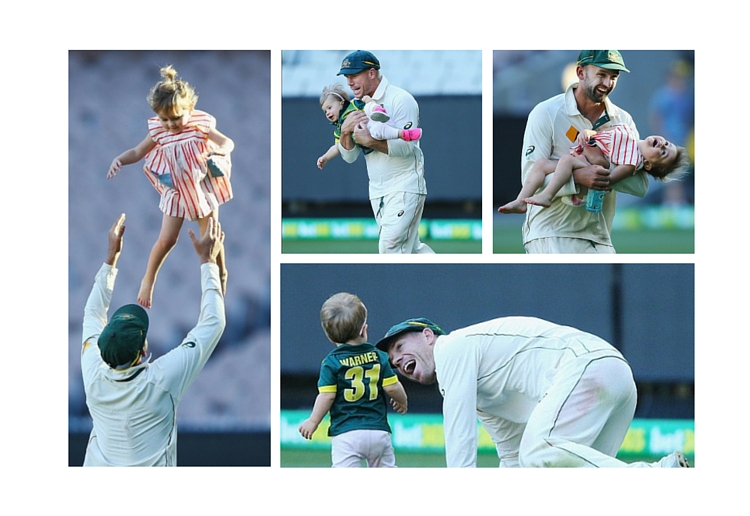 The Australian Cricket team have spent a fun afternoon sharing their talents with their littlest and dearest fans.

David Warner and his one year old daughter Ivy Mae traded training secrets as the top-order batsman got in some training during day four of the Second Test match between Australia and the West indies at the Melbourne Cricket Ground.

His arms wrapped around his daughter, the 29-year-old attempted to show her his skills, but at times her attention waned as father and daughter played together on the pitch.

Running around excitedly on the pitch in bright pink trainers and wearing a coloured shirt emblazoned with her father’s name on the back, she was clearly the apple of her father’s eye.

Other cricket players’ children who were keen to pick up tips from the famous Australian cricketer joined the fun pair on the pitch, including Nathan Lyons’ daughter, Harper.

The sportsman and his ironwoman wife are expecting their second child very soon.

On Christmas morning, the couple wished their fans a merry Christmas on social media.

Uploading a photograph with his wife and daughter, David told Instagram followers: ‘Merry Christmas to everyone out there. We hope you all have a fantastic day.  The people that sadly can not be with us today you are always in our hearts on this very special day. Love Candice, Ivy Mae and David.’