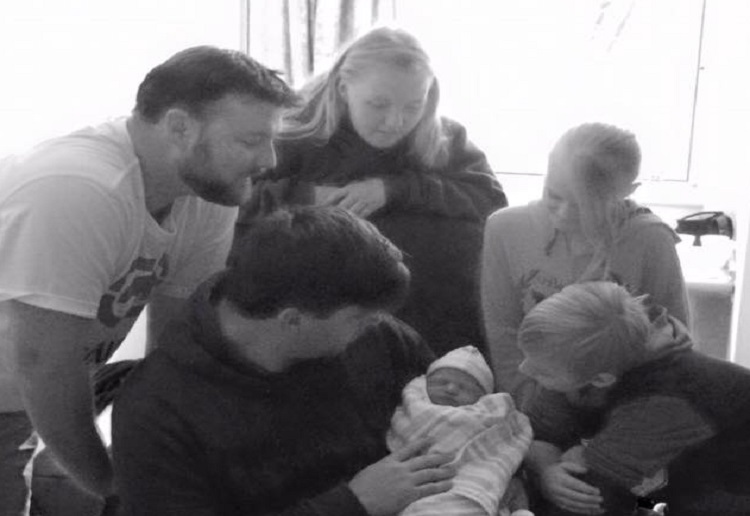 Sister gives birth to her brother’s baby boy – ‘Some people think it’s weird that I gave birth to my brother’s baby, but I think its an absolute honour.’

Ashlee, 30, volunteered as a surrogate because her brother David and his partner Brendan had been desperately searching for a way to have children, reports Daily Mail.

She said she was thrilled to have been able to give her brother the baby he and his partner longed for.

She said: ‘Being a mum has brought me so much joy, I wanted the same happiness for David and Brendan.

‘When I saw how much David and Brendan were struggling to become parents together, I knew I had to help.

‘Some people think it’s weird that I gave birth to my brother’s baby, but I think its an absolute honour.’

She said: ‘When I was growing up all I ever wanted to be was a mum.

‘That’s why the decision to become their surrogate was so easy for me.

‘People questioned if I’d be able to hand over a baby at the end, but that never once worried me. I was the baby’s aunty, not its mum.’

David, who already has three kids from a previous relationship, knew the moment he met Brendan they would become parents together.

Brendan McQuiggin said: ‘We met when we were studying to become interpreters for the Deaf Society, NSW. 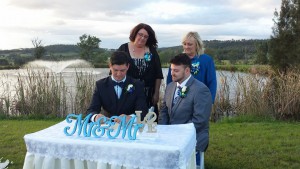 ‘David had three beautiful children and I loved that I got to be a part of their lives as our relationship grew serious.

‘But there was always a part of me that wanted to have a baby of my own.

‘When we started looking into it, the system was stacked against us for being in a same-sex relationship.

‘I honestly thought it would never happen.’

She said: ‘Watching them face huge hurdles was absolutely heartbreaking.

‘After our girls were born, I turned to John and said, ”It’s not right that they’re wonderful parents but they can’t have a baby together”.

‘I told him I wanted to offer to be their surrogate and he was amazingly supportive.

‘A few months later, after lots of discussions and research, I messaged David and Brendan and offered to ”cook” their baby for them.

‘It took a few days for them to believe I was serious. They couldn’t believe it.’

Once Ashlee’s generous offer had sunk in, the broody couple decided to advertise for an egg donor to fertilise with Brendan’s sperm.

‘It was not only completely genuine, but a way to ensure any baby I fathered, would have a link to David’s family. It was perfect and I was so thankful.’

Ashlee said: ‘The boys advertised for a egg donor on a surrogacy forum and within a few days they had a solid offer from a woman named Corrinne Hocking.

‘She used to study at the place where Brendan and David met and it felt like all the stars were aligning.

‘After doctors created a few viable embryos, I was implanted with the first one in September 2015.

‘I remember feeling really excited about the prospect of falling pregnant with my future niece or nephew.

‘We discovered it had worked about two weeks later and I got David’s kids to draw banners to tell them the news. It was an amazing moment our families shared.’

When baby Rylee arrived into the world on June 4, 2016, weighing 4.28kgs, he was put straight into Brendan’s arms.

Ashlee said: ‘Though I was super excited to meet him, I thought it was far more important he bonded with his dad’s first.

‘After Brendan cut the cord, nurses placed Rylee onto his bare chest. It was beautiful to see.

‘It was only after he’d spent a good hour or so with both his dad’s that I cradled him.

‘Looking down at him, with my husband John by my side, I couldn’t believe he was finally here. I kept saying, ‘look what we’ve done.’

‘I was so pleased we had given such an incredible gift to two people who mean so much to me.

‘To see and feel the love they had for Rylee from the moment he was born, I knew we’d done the right thing.’

Rylee is now 16 weeks old and doing well with his doting dads and older siblings, while Ashlee is sharing her story to raise awareness about the gift of surrogacy.

She said: ‘It’s still such a taboo and you often only hear about the tough stories, not the positive ones like ours.

‘Rylee has only been a positive and the fact I’ve made two very deserving men, parents, should be celebrated.

‘I love the fact I get to tell people, I had my brother’s baby. It’s an incredible story.

‘I look forward to watching him grow up in the arms of his dads and being the aunty that ‘cooked’ him for them.’

Such a beautiful family. Congratulations to them!

Last month we shared the story of Samuel and his partner Bradley, who are desperate for a baby but know the only hope he has is his sister, Bronte. Read their story here.