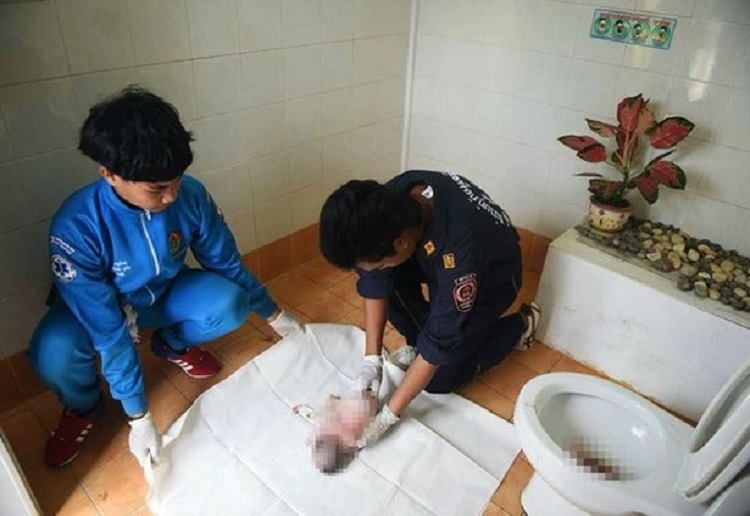 The body of a premature baby has been found in a train station toilet.

It is believed the mother abandoned the prematurely born baby boy in the toilet bowl in Saphli, Thailand.

The baby still had the umbilical chord attached and was covered with blood, suggesting the mother had just given birth before dumping the child, reports The Mirror.

The body was discovered by a cleaner at the station, Mr Hatt, when he arrived to clean the bathroom.

Upon opening the bathroom door, Mr Hatt said he found a bloodstained floor, leading him to the toilet where the child was left.

Local Police in Thailand said: “This is a couple who have been pregnant before marriage with no way out.

“When the baby was born near maturity, the boyfriend hurried to take his girlfriend to give birth in the toilet of the train.

“After birth, the baby’s body was placed and horrifically was put down the toilet. The baby died a short time later.

“The authorities will examine CCTV footage from various points.”

Authorities took the body to the medical examiner at a hospital in Pathiu for examination.

This story comes just a week after a newborn baby was found alive dumped in a cesspit under a public toilet with a bag over its head.

Earlier this year we also shared a story of a Baby boy born in the bathroom of a Subway and abandoned in a toilet by his homeless mother.

Tasmanian Senator Helen Polley has been campaigning since 2007 to have baby hatches incorporated into existing institutions like hospitals and fire stations and police stations, so that unwanted babies can be cared for rather than being left to suffer and endure the elements and possibly die, reports Hoopla.

Safe baby havens have been launched in the US, Germany, Canada, Italy, Japan, Malaysia, and in China the government set up 25 baby hatches where mothers could leave their babies. Some of the centres closed down as they were unable to cope with the influx of babies.

Anyone seeking support can contact the Maternal and Child Health Line 13 22 29 or Lifeline at lifeline.org.au