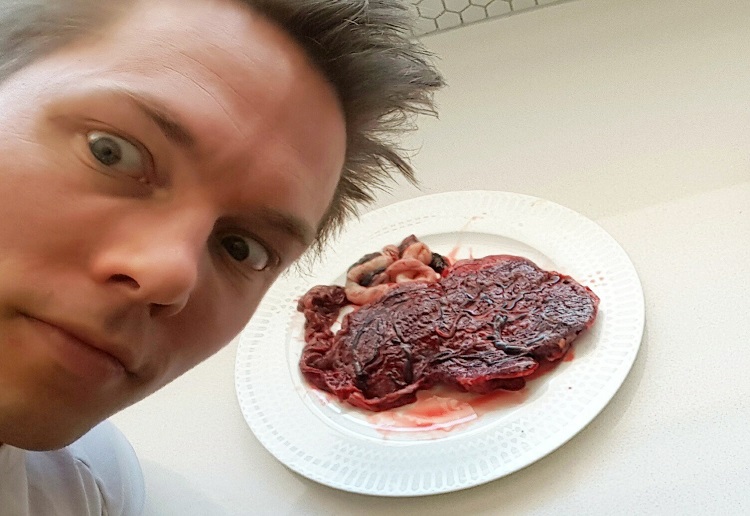 Australian fitness guru, Aaron Curtis, tucked into a tasty plate of his newborn daughter’s placenta in the hope of ‘making some gains’.

The Daily Mail shared, Aaron filmed himself preparing the dish in a video titled: ‘Consuming Your Daughter’s Placenta for Extra Natty Gains’.

‘With the birth of my first child, I thought I would consume the organ that provided her with life during the pregnancy in the hope of making some gains,’ he explained.

‘After waiting more than a week with this placenta in the fridge, I thought I better cook it and wash off some of the slime before I eat it… to minimise the chance of dying,’ he said.

After cooking some of the placenta on a hot grill, he continued: ‘I’m starting with a little bit, just to reduce the chance of getting botulism or something.’

After he finished chewing on a piece he said, ‘Tastes like liver I think. It’s not too dry in the middle. Bit over done. ‘

We previously shared the story of a dad who sparked uproar after posting a video of himself eating his wife’s placenta with an English fry-up breakfast.

Ross Watson, 32, even added pepper and brown sauce to the placenta, declaring that it was “edible and nutritious”.

He said it tasted like a bad steak. Read that article here.