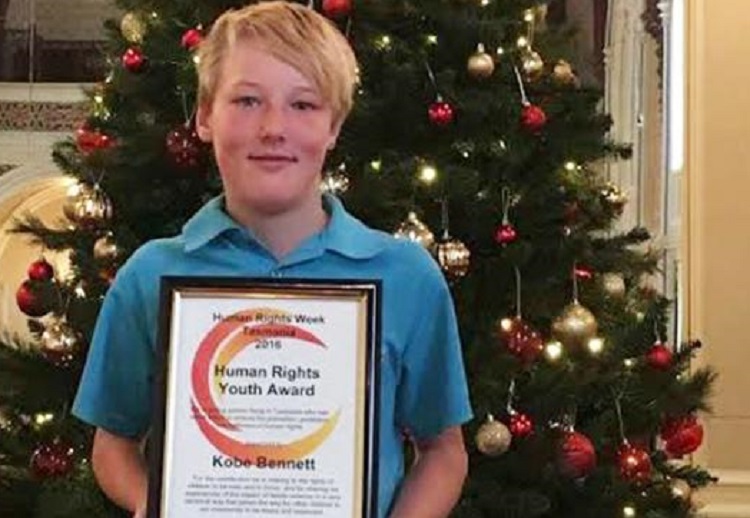 Young boy shares how he overcame the daily terror of dealing with a violent and abusive father.

Since Kobe Bennett, 12, was a toddler his violent father made his life a misery through vicious assaults and verbal abuse from one day to the next, News.com.au reports.

When he was just three years of age his father threw him against a wall.

‘He hit me and my siblings, and made me feel like crap. ‘He yelled at me and bashed me. I remember it, but I just don’t like to tell people,’ the 12-year-old Tasmanian said.

‘To be honest, I thought about stabbing him and I used to practise,’ Kobe said.

Kobe would practise self defence by stabbing a teddy bear “with a very sharp knife” in case he needed to fight off his father, or so that he could protect his mother, Maree.

‘When my dad hurt my mum, my heart felt like popping. If you don’t tell someone and get rid of your dad when he hurts your mum, your mum will be in a coffin and your dad will be off hurting someone else.’

Following the violence that he and his three older brothers had to endure, to help him and others in the same situation cope with it all, he wrote the book The Only House in the Desert.

In it he shares his thoughts on family violence, describing it in the audio book of the publication as ‘like Alice in Wonderland only it’s like a desert and your house is the only one left in the middle of it’.

He wanted the book to give a voice to children who have suffered in the same way as he and his brothers have, and a way of processing what they’ve had to experience.

“I wrote this book because I wanted to help other kids like me,” the now 12-year-old says in the book.

“When you’re little, you are stuck and you can’t go anywhere by yourself.

“Family violence houses are like prisons for little kids. Adults need to listen up and stop doing family violence they need to go and get some help.”

It details the sickening fear he had of his abusive father, and advises other children how they can protect themselves if they are in the same brutal circumstances.

Kobe’s literary work was also given the seal of approval in January when received a Human Rights of Tasmania award for his efforts.

He was given the award for ‘taking action to ensure the promotion, protection and fulfillment of human rights’.