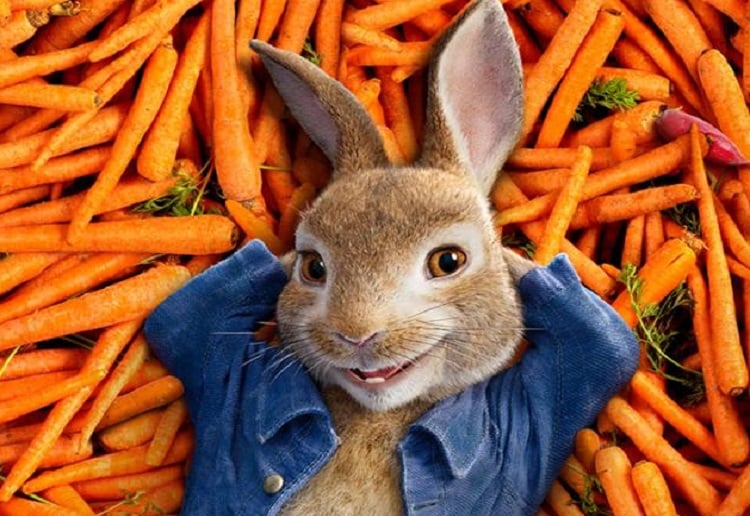 The new Peter Rabbit film, which is out in theaters next month, is sparking concerns for those families with children who suffer from serious allergies.

The film is based on the books by Beatrix Potter and – like Paddington — features computer-generated animals interacting in the real world.

Peter Rabbit, the mischievous and adventurous hero who has captivated generations of readers, now takes on the starring role of his own irreverent, contemporary comedy with attitude. In the film, Peter’s feud with Mr. McGregor (Domhnall Gleeson) escalates to greater heights than ever before as they rival for the affections of the warm-hearted animal lover who lives next door (Rose Byrne).

James Corden voices the character of Peter with playful spirit and wild charm, with Margot Robbie, Elizabeth Debicki, and Daisy Ridley performing the voice roles of the triplets, Flopsy, Mopsy, and Cottontail.

Families are not impressed by one storyline at all

“If you’re taking your kids to see Peter Rabbit, please read this.

My son has severe, life-threatening food allergies. And while I can usually keep my anxiety at bay about it, this movie- that I was going to take my son to go see- has raised some huge concerns and red flags.

I don’t find this remotely funny or humorous and it’s definitely not a joke.

While my family will not be seeing this movie, I am in no way asking you to do the same thing.

But what I am asking you, is to please have a conversation with your kids about the scene.

Please remind them that it is never OK to tease or taunt somebody who has a food allergy with the food that they are deathly allergic to. It is a severe form of bullying that is extremely dangerous.

Kids have been rushed to the hospital and have died because their peers think it’s funny. And this movie condones the funniness behind it.

Please remind your kids it’s not funny. No part of this is funny.”

US group Kids With Food Allergies Foundation have issued a message to parents about a scene that may be disturbing to young viewers who have a food allergy.

Allergy & Anaphylaxis Australia writes, “Many people with severe allergies have written in about the appalling content which allegedly sees a character being bullied because of his food allergy.

If you are upset, angry or frustrated by corporations than make life with potential life threatening allergy even more difficult(to make a monetary profit), write to Sony Pictures and let them know a story line showing management and support (or no message at all) would have won us over but belittling and bullying is just not acceptable. What were they thinking?”

“This mocks the seriousness of allergic disease and is heartbreakingly disrespectful to the families of those that have lost loved ones to anaphylaxis,” the petition reads.

“To spread a message that condones such victimising and dangerous behaviour amongst children is grossly offensive to worldwide viewers, especially those who live with severe allergic disease.”

The hashtag #boycottpeterrabbit has also kicked off on social media.

“Given that this movie is aimed at children, to see a character being intentionally attacked with the allergen that they’re allergic to has been really disturbing worldwide, not only for the allergy community but also for parents,” Globalaai founder Dr Pooja Newman said.

“We have a serious problem in our community with a lack of understanding and a lack of appreciation that allergies can be instantaneously life threatening and many children have died all over the world from accidental exposure to food allergens.”

“Unfortunately, I believe the Peter Rabbit movie is sending a message that food allergies are not necessarily to be taken seriously and that food allergy bullying is something that is OK.”

Many parents that have been made aware of the storyline are now stating that they will  no longer be taking their children to view the film.

Sony has issued an apology

Sony Pictures have issued an apology for not being more aware and sensitive to the issue. “Food allergies are a serious issue. Our film should not have made light of Peter Rabbit’s archnemesis, Mr. McGregor, being allergic to blackberries, even in a cartoonish, slapstick way.”

“We sincerely regret not being more aware and sensitive to this issue, and we truly apologize.”

Will you be watching  the movie or joining the boycott?