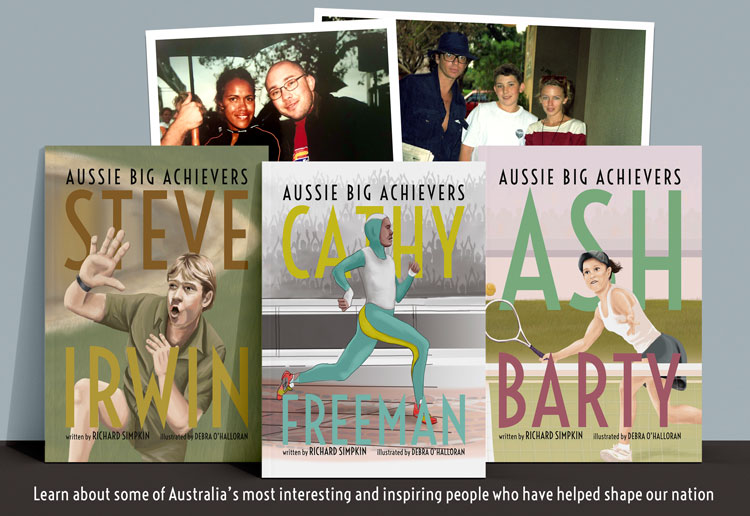 If you ask most of us what you do for a living, we can usually sum it up in just a few words, for Richard Simpkin it may be a few sentences.
Photographer, author, artist, creator of the world’s first celebrity selfie exhibition and founder of World Letter Writing Day to mention just a few of the things that Richard could have on his C.V. Well, if he had one!

“As a child I felt a little different to most children as I was diagnosed with type 1 diabetes when I was four and a half. In my early teens a Dr told me that I may not live past the age of twenty-one, I thought well if that’s the case I never want my life to be boring”.
When Richard was sixteen, he found out that INXS were recording an album at their Sydney studio. “I went to the studio, and I met Michael Hutchence, he was incredibly kind and introduced me to the rest of INXS. I started to hang out with the band and became friends with them. Michael was dating Kylie Minogue and I got introduced to the world of celebrity”.

In 1995 Richard had an idea that he wanted to meet, photograph and interview as many Australian legends as he could, with the aim of getting his work published into a book.
That year Richard wrote a letter to Sir Donald Bradman asking to meet him, a few weeks later Richard was sitting with Sir Donald at his home in Adelaide.

“It was incredible, Sir Donald was and still is one of my idols and there I was sitting next to him on the steps at the front of his house in Adelaide”.

“It was incredible spending time with the likes of Sir Donald, Dame Joan Sutherland, Frank Lowy, Dawn Fraser and the last of our WWI Diggers, their stories were truly inspiring”.

Richard wrote to each legend requesting their time for an interview and photoshoot and nine times out of ten he received a letter back with an invitation to meet them.

“I knew I was contacting people that had come from a time where letter writing was in some cases the only way people could communicate with one another. There was no point trying to send an email to a World War One Veteran when they didn’t have a computer. I realised the power of a handwritten letter”.

“I’d spent my life travelling the world and my exhibition titled: Richard & Famous, which documented my life with celebrities over twenty-five consecutive years with the likes of Brad Pitt, Audrey Hepburn, The Dalai Lama, Nelson Mandela, Taylor Swift, Katy Perry U2 and Oprah was now travelling to galleries and photo festivals globally”.

In 2014 Richard founded World Letter Writing Day at his former school in Sydney and since then he has been visiting schools conducting letter writing workshops.

“I encourage children to take a break from social media and reconnect with family and friends with a handwritten letter. Many of the children write thank you letters to their parents, it’s such a special moment when their parents open the letter”.

In late 2020 Richard’s son Oliver was reading his dad’s 100 Australia legends book. Oliver asked why his dad didn’t have legends books for kids. Inspired by Oliver’s question, Richard wanted to teach children about Australian’s that had a dream when they were children and believed in themselves to achieve their dreams.

“I chose Ash because I saw how excited my son was when she won Wimbledon last year and we are all inspired by Ash’s recent win at the Australian Open. Cathy inspired me when she won gold at the Sydney 2000 Olympic Games and Steve has inspired millions of people around the world to not only look after all animals but to also look after the environment”

The Aussie Big Achievers books and are a fun and educational way for children to learn about some of Australia’s most interesting and inspiring people that have helped shape our nation. Each book encourages children to always believe in themselves and never give up on their dreams.