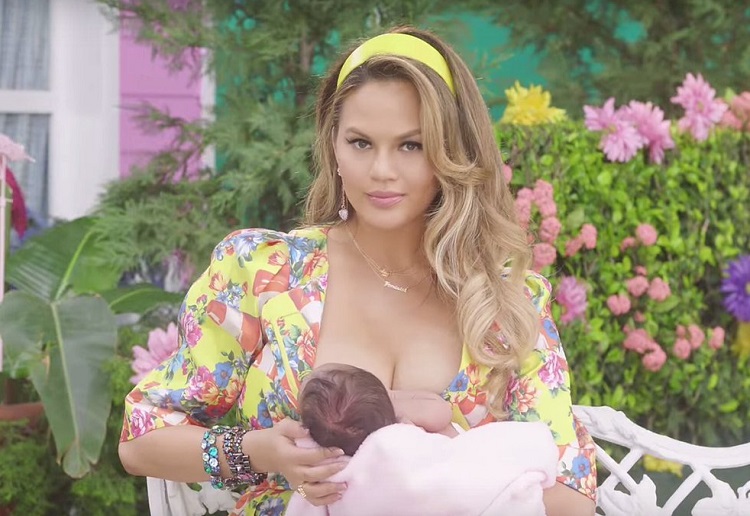 The 30-year-old model’s answer ‘Absolutely, Kim, what days are you shooting? I’m in,’ ” Teigen says. “It was so much fun to do. I love Fergie. I love her music. And it was just really nice.”

“They closed down the set [because] Luna was so new,” Teigen explains. “She was maybe 4 weeks old. They turned off the air. They cleared people out. And it was her natural lunch time anyway.”

The moment of Luna breastfeeding on camera was apparently impromptu, according to Teigen — and husband John Legend, 37, was there too.

“They were so accommodating of a newborn baby, and John was watching,” Teigen adds. “Honestly, it was like 10 minutes, but it went by so fast. I loved it.”

Not back in shape but hiding it well

“I was with Kim in a scene, obviously. And what I realized is that I need to live in latex,” Teigen jokes. “Everyone is talking about how we were all Photo shopped. No, you’ve never seen anything like latex. What looks like denim jeans [on Kim], that’s latex.”

“And latex gives where it needs to give and cinches when it needs to cinch. In the bouncing scene, Kim was wearing a latex robe, latex high-waisted pants. And when I was wearing the gold — all latex. Honestly, I wasn’t feeling my sexiest, but when you get on that set and have everyone rooting for you, and have this song going, that makes you feel sexy.”

Teigen shares that she doesn’t feel 100 percent back in shape since welcoming her baby girl.

“No, I’m not back yet by any means,” she says. “I think people think that I’ve snapped back, but I really have just, in fact, been utilizing undergarments more. I never was a Spanx person or a waist-trainer person. Now I do it. It looks great on the outside, but trust me, I’m a bit soft.” 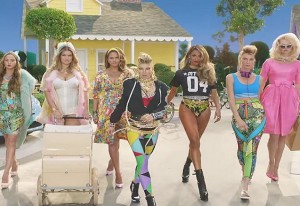