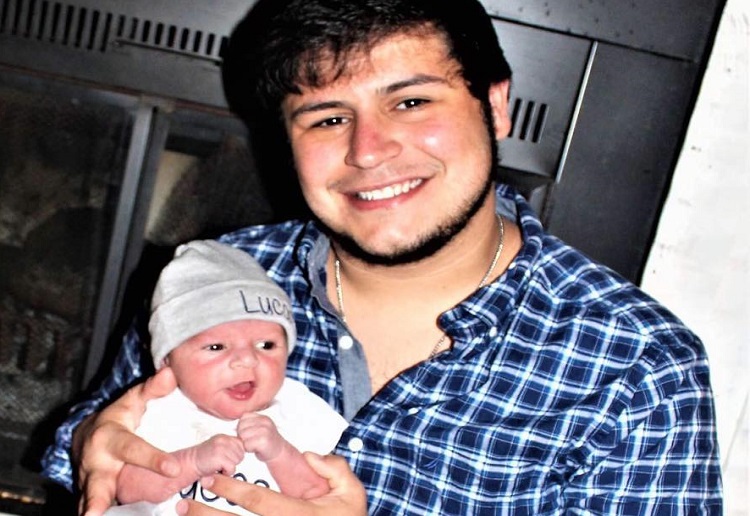 A young father has spoken of his heartbreak after his two-month-old son sadly died.

Carmine Martino, 20, took a rare opportunity to get some sleep, while lying on the couch in his North Carolina home with little Lucas resting on his chest.

As Mr Martino and his partner, Hayley Gavrilis, 20, both continued to nap, the young father had no idea of the tragedy unfolding next to him.

Lucas had fallen between his dad’s arm and the couch and suffocated.

Upon discovering his body in the early hours of the morning on November 26, the parents tried desperately to revive him before paramedics confirmed their worst fears.

Both suffering from Post-Traumatic Stress Disorder, the couple split one month after Lucas’ death.

“There was a lot of blame obviously – of course I blamed myself,” Mr Martino told The Metro.

“Being a father – it’s my job to protect my family, my son and my girlfriend and I failed them. I was extremely angry with myself.”

Despite their split, the couple are now speaking out to parents about the dangers of falling asleep with newborn children.

“This could have happened to anybody… this was one little mistake and that’s why it’s so important to raise awareness.”

They are also encouraging all parents and carers to learn CPR.

Earlier this year we actually shared a story on the sweet and innocent photo’s of an infant sleeping on daddy’s chest and how experts warn it is actually a very dangerous pose. READ MORE!

SIDS and Kids recommend how to Sleep your Baby Safely:
1. Sleep baby on the back from birth, not on the tummy or side
2. Sleep baby with head and face uncovered
3. Keep baby smoke free before birth and after
4. Provide a safe sleeping environment night and day
5. Sleep baby in their own safe sleeping place in the same room as an adult caregiver for the first six to twelve months