Article This Daddy Blogger Struggles to Tell His Twins Apart 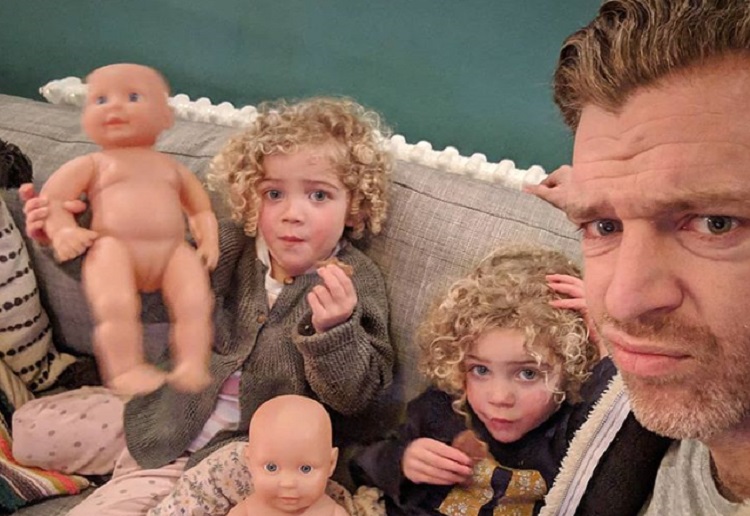 A daddy blogger has been slammed by mums after admitting he can’t tell his own twin girls apart.

Simon Hooper, 35, aka Father of Daughters, a popular dad-of-four with 919,000 Instagram followers, joked he was “back to square one” when his wife Clemmie dressed the girls the same.

Posting on Instagram, Mr Hooper wrote that he thought he had finally nailed it and that the days of referring to the girls as “this one”, “that one” or “the twins” were at an end.

He claimed he had mistakenly believed that “I was going to be a parent who could distinguish between my genetic copycats. I was wrong,” Mr Hooper wrote.

“Thanks to @mother_of_daughters dressing them as mirror images of themselves, today I was straight back to square one & spent the next 15 minutes playing a real-life guess who.”

I thought I had it nailed – I thought the days of refering to ottie and Delilah simply as ‘this one’, ‘that one’ and ‘the twins’ were numbered and that I was going to be a parent who could distinguish between my genetic copycats. I was wrong. Thanks to @mother_of_daughters dressing them as mirror images of themselves, today I was straight back to square one & spent the next 15 minutes playing a real-life guess who – calling them the wrong names only to receive blank faces & zero responses in return. I’m strongly considering shaving one of their heads. Screw the curls – the need to identify my own children is more important. #twinlife #myscrewed #noshedidit #fatherofdaughters #dadlife #instadad #fod #twins #guesswho

Mr Hooper said he called his daughters the wrong names and received blank faces and zero responses from them.

“I’m strongly considering shaving one of their heads. Screw the curls — the need to identify my own children is more important,” he wrote.

Mr Hooper’s post sparked a fierce debate on Mumsnet, where some questioned how a parent could not know their own kids.

One mum wrote: “I get that they’re identical (and they really are visibly so) but he’s their dad! ”

Another mum commented that her daughters were identical twins and “they can’t tell themselves apart in photos”.

Another mum, who’s a hospital worker, shared: “We had a dad that brought the wrong twin to A&E once.”

One mum wrote that her husband couldn’t tell the difference between “our two non twins when they were babies”.

Other mums pointed out that his post was all tongue in cheek and they were pretty sure he did know which twin was which. It was all just innocent fun.

Our house is fast becoming a commune for dolls that have cast aside the constraints of clothing & embraced their natural form in all its glory. In other words, it’s a plastic nudist camp. I have drawers literally full of fake people rocking all sorts vaginas and penis’s, ranging from limbless pound shop dolls with smooth under carriages all the way up to these rather detailed, anatomically correct ones that love nothing more than letting it all hang free, and I for one am tired of having a penis pushed it my face at bed time (there’s a sentence I never thought I say). Through hosting this ‘celebration of the flesh’ I’ve also learnt that girls think Willie’s are hands down, THE most hilarious thing on the planet, which is just great for me. Do boys find vaginas funny? Not that I’m aware. So why is our manhood worth more laughs than a sellout comedy gig? I’m off to get surgery to make myself completely smooth so the laughing will stop. #plasticnudistcamp #willyintheface #dontlaughatit #fatherofdaughters #dadlife #instadad #fod